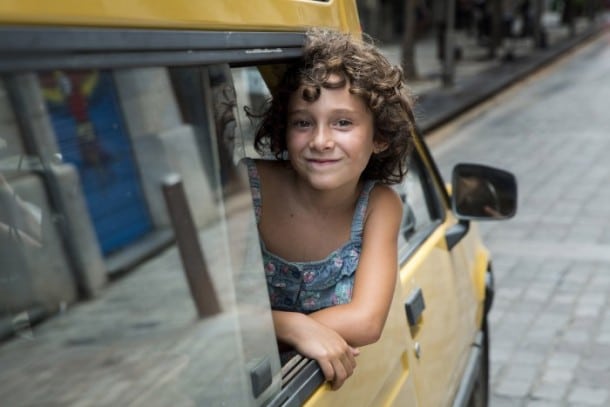 The London Spanish Film Festival kicks off at the Ciné Lumière and Riverside Studios for its 18th edition from September 22-29 . An opportunity to catch the latest Spanish films that may not get a general release in UK cinemas.

In 1933 the young filmmaker Luis Buñuel traveled to Las Hurdes, an isolated and extremely poor region in central Spain, to film his surrealistic documentary Land without Bread. 85 years later hispanist and biographer Ian Gibson does the same trip as part of his work of recovering the most recent historical memory of Spain through the biographies of the country’s famous artists Buñuel, Dalí and Lorca. Gibson’s trip will end in Granada, where the search of Lorca’s remainings seems to be coming to an end.

Alegría lives in the Southern city of Melilla has been trying to distancing herself for her Jewish background when the arrival of her niece brings the past flooding back. Will this be the time to reconcile with her own daughter, who she hasn’t seen for years and is now living in Israel – and a mother herself? Inspired by the director’s own experience, Alegría is a film by and about women, their friendship and understanding beyond religion and culture as well as the conflicts and contradictions within.

When Julio, the leader of an UFOlogists association in Elche dies unexpectedly, it falls to José Manuel take over his work. Meanwhile, everyone in Elche is looking for a girl who has gone missing. Exquisitely framed, García Ibarra’s debut feature film is uncomfortably amusing and defies expectations in a terrific way.

With a solid and long acting career, Javier Pereira moves to the other side of the camera and surprises us with Suelta, his first short, a dark story about trust and preconceptions that won’t leave you indiferent.

Emilio and Rosa have created a dream family living with their five daughters in an isolated valley in the Canary Islands. But the past comes back to haunt them in this tense debut feature based on Paul Penn’s novel Desert Flowers

Laura is a psychologist working with victims of gender violence, and harassed by the husband of one of her patients in this subtle and stylish psychological thriller.

Pereda’s formidable debut rifs on adolescence insecurities and delivers a grisly and ferocious psychological horror film which premiered at Sundance Film Festival this year. It sees Sara, an overweight teenager, become the victim of constant bullying by the other girls until the arrival of a mysterious stranger in the village.

Neus Ballús third feature film is an original and deadpan docudrama that follows the  working days of three handymen from different cultural backgrounds in the Catalan capital. Entertaining and times hilarious in its depiction of ordinary life.

This moving reflection on loyalty and the ties that bind is set in small-town Mallorca where two estranged sisters, Anna and Marina will uncover all sorts of skeletons in the cupboard when they are forced to sell a local bakery. Anna has barely left the island and is unhappy in her marriage, Marina works as a doctor for an NGO in Africa.

Autumn 2015. Two Catalan lifeguards, Oscar and Gerard, travel to the Greek island of Lesbos after seeing the heart-wrenching photograph of a little boy drowned in the Mediterranean. When they arrive the shocking reality is much worse: thousands of people are risking their lives everyday trying to cross the sea in the most precarious of vessels, fleeing from armed conflicts and other miseries in their home countries. And nobody is doing any rescue work. Based on real facts and real people, Barrena’s multi-awarded film invites us to think about what can be done when a crisis hits from political, social and human standpoints.

In 2000, Maixabel Lasa’s husband, Juan María Jáuregui, was killed by the terrorist organisation ETA. Eleven years later she receives a message from one of the men who killed Juan: he wants to meet with her in the Nanclares de la Oca prison in Álava, where he is serving his sentence after breaking ties with the terrorist group. Based on the inspiring true story of a brave woman whom, after losing her husband at ETA’s hands, decided to take a step towards a peaceful coexistence by agreeing to meet the imprisoned terrorist responsible for her husband’s death.

Euskadi 1985, and 12-year-old Marcos and his friends, José Antonio, Paquito and Toni are forced to face turbulent times of political violence and terrorism even though the  summer holidays are in full swing.

San Sebastian, 2000. The Basque conflict is active. Sara, a fifteen-year-old girl, writes a letter to her absent brother as she trains for the most difficult clib of her life.

Manuel Martín Cuenca explores the dark and sinister side of human nature in this atmospheric drama that centres around a pregnant teenager who has run away from a juvenile detention centre near Jaen.

Carla Simón’s spectacular debut feature is a beautifully crafted, sensitive drama about a six-year-old girl who goes to live with her Catalan family after her mother’s death.

When the body of a young girl is found inspector Manuel Bianquetti sets, despite the opposition of his superiors and coleagues, on a solitary crusade to find those responsible for the crime, which reminds him of his own troubled past. The only person who seems to be on his side is his neighbour, a fragile and distrustful nurse. Adapted from the bestselling novel by Benito Olmo and set in the city of Cádiz, Unfinished Affairs is a true noir full of misleading clues, revenge, corruption and bold decisions as well as a portrait of the harsh reality of gender-based aggression.

Trance follows Jorge Pardo, renowned flutist and saxophonist of Paco de Lucía’s sextet, on a journey to the heart of flamenco music. Pardo’s flamenco-jazz work is essential to understand the evolution of contemporary flamenco. Belmonte’s road movie contains some exceptional musical moments and captures Pardo’s conception of art as a way of life and life as art.

A TREASURE FROM THE ARCHIVES HOMAGE TO BERLANGA

After the death of Franco, the Marquis of Leguineche returns to Madrid from thirty years of voluntary exile in the countryside. From his palace he intends to approach the King to resume court life. Berlanga, with his usual sharp wit, explores how Spanish high society tries to invent itself after Franco’s era has ended.