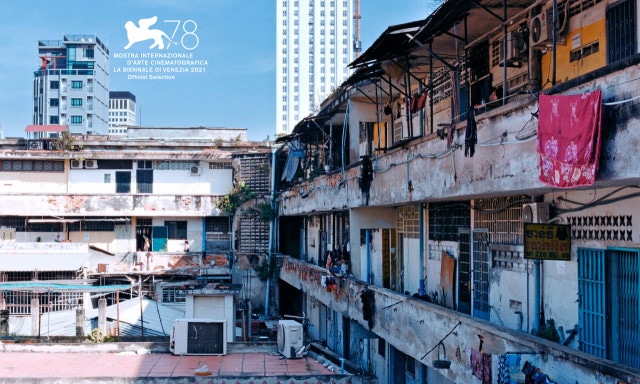 Cambodian filmmaker Kavich Neang once again returns to the timely topic of gentrification in his second film – this time a drama – following his 2019 documentary Last Night I Saw You Smiling.

Housing has become big business in the Cambodian capital Phnom Penh. The titular White Building, built in 1963, was once a haunt for artists, but now the developers have arrived, investors from Japan and China. Boyhood friendships and family ties are going to be tested.

The story follows three men in their early twenties Samnang (Chhun), Ahco (Soem) and Tol (Tho) who spend their time chasing women – unsuccessfully – and trying to make it with a dancing routine. Their performances in restaurants and pubs are not a big hit, and they go on dreaming. But soon Tol leaves for the ‘bright lights’ of France where you can buy all sorts of cool trainers. This leaves Samnang living with his mother (Soha) and father (Hout), a former sculptor in the white building, his home since birth.

Stories about people moving from the rural areas to the newly built but morally corrupt cities have been a popular theme for Far Eastern filmmakers with some award-winner features: Stray Dogs (2013) being the most memorable. White Building sees the other side of the story. Samnang’s father is chasing the dollar on home ground, heading up the white building’s tenants’ association, and hoping to strike a good deal with the developers. But even the best outcome, based on a deal in square meters, would only secure the families with the largest flats a decent place in central Phnom Penh, with more chance of a job. Most residents would have to leave for the countryside, where employment is thin on the ground.

Samnang’s sister Kanha (Min) has already left the family, and her parents are afraid her brother will also fly the nest, conditions in the estate are rapidly going downhill and the landlord has cut off the water supply to the block. As as result of these upheavals Samnang’s father is not only relieved from his duties as chief negotiator, but also has to have part of his leg amputated as a result of untreated diabetes, In their new country home, Samnang must make a decision.

DoP Douglas Seok has an eccentric way of shooting: cameras are on drones, the angels of the buildings taking on an German expressionist look as the tenants flee the building in droves. Phnom Penh’s three-seater scooters loom large in Seok’s rowing camerawork. Everything seems out of kilter in this ‘end of days’. At the centre of the tornado, Piseth Chhun deserved to win Best Actor in Venice Horizons sidebar at the 78th Mostra last month. AS