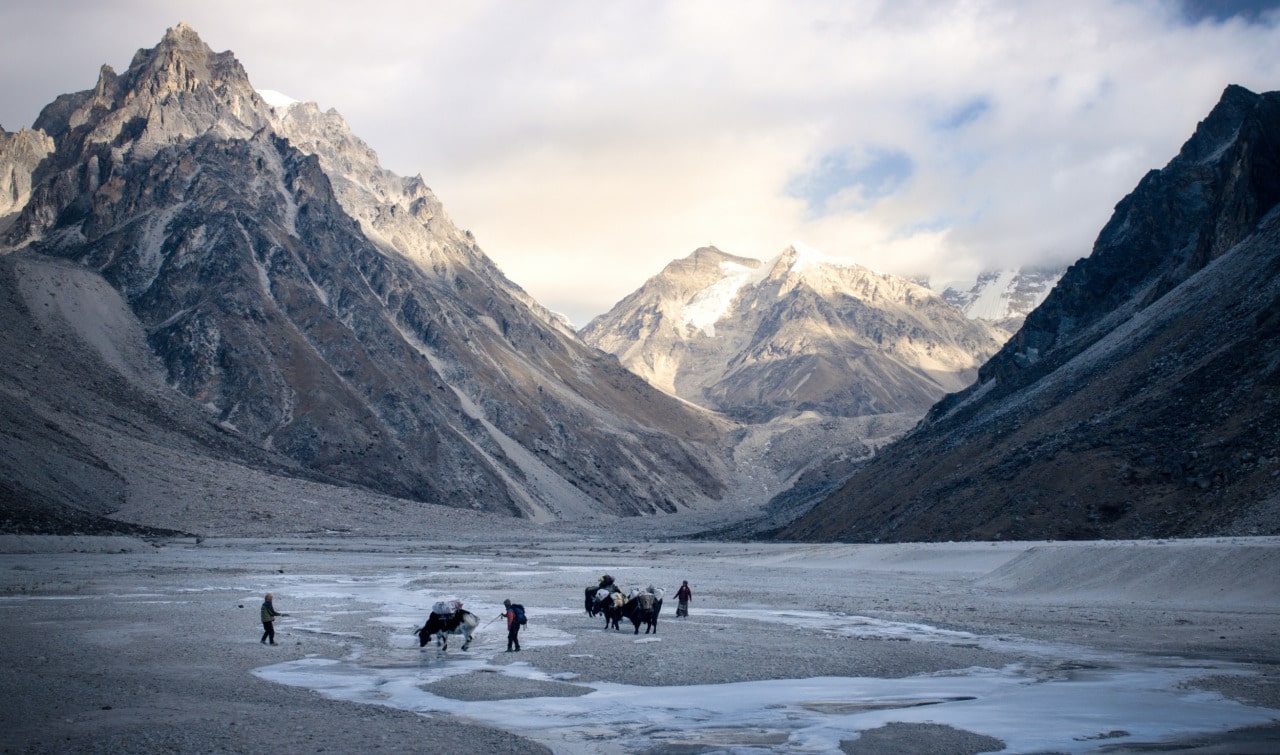 As Buddhists, Sherpas are very respectful of spirituality of their mountain habitat as we discovered in Jennifer Preedom’s award-winning documentary Sherpa. Their habitat of the Himalayas has long been exploited by an increasing number of tourists who they depend on for their livelihood, offering expert knowledge of the unique mountain range in return. But recently things have got out of hand with tourists expecting an increasingly luxurious experience that has led to overcrowding of the region that often results in tailbacks and risk-taking.

The focus here in Wall of Shadows, that took a prize at the Bergen International Film Festival in Norway, is once again the intrinsic spirituality of this visually stunning but highly treacherous part of the world, where the weather can change in minutes leaving climbers stranded and in danger.

The film takes place in Nepal’s Kumbhakarna Mountain, the 32nd highest in the World and an outlier to Kangchenjunga, the 3rd highest peak with some highly challenging weather conditions and steep ascents. This is home to a Sherpa family who agree, against their better judgement, to take some experienced climbers who push the guides to uncomfortable emotional limits in order to reach the top. The Sherpas continually voice their concerns, but equally realise they won’t get paid if they don’t complete their contract, forcing them between a rock and a hard place. Meanwhile the Sherpas are clearly uneasy but continue to pray to the mountain spirits.

Their clients are three leading alpinists, the outstanding Polish climber Marcin Tomaszewski and two-time winners of the climbing Oscar (Golden Ice Axe) Dmitry Golovchenko and Sergei Nilov from Russia, take part in the expedition on the eastern face of the mountain which, at 7,400 metres, is one of the most difficult challenges in alpinism today. This is the first time they’ve worked as a team and tensions start to emerge surrounding their different strengths and weaknesses.

DoPs Piotr Rosolowski (who also co-wrote the script) and Keith Partridge conjure up a real sense of awe in the majesty of the locations making this feel like a spiritual journey while at the same time a highly dangerous one. Barbara Toennieshen creates a sense of slowly building tension with her clever editing which never cuts corners in allowing the unique serenity of the place to beguile the audience. To this day, Kumbhakarna’s East Face (7710m) remains unconquered. MT

The film is the third collaboration between director Eliza Kubarska and producer Monika Braid and is a Polish-German-Swiss co-production. MT