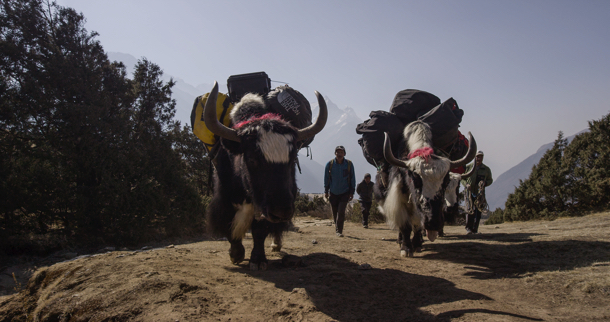 April 18th, 2014 will go down as the worst day in the history of Everest when the Sherpas finally called time on their uphill struggle with mountaineering visitors.

The fascination with climbing Everest is a passion that seemingly knows no bounds for wealthy foreigners whose life ambition is to scale the World’s highest mountain. Summit, Touching the Void, Everest and Beyond the Edge have told of the dangers and elation of reaching the summit. SHERPA explores the conquest from the perspective of its much-maligned native Himalayans – the Sherpas. An ethnic group from Nepal’s mountain region, they are, for the most part, Tibetan Buddhists. Nomadic settlers they are physically and genetically adapted to life at high altitudes due to their blood’s unique haemoglobin-binding capacity and doubled nitric oxide production. From childhood they develop an intimate knowledge of the region and their compact, muscle-bound physiques enable them to carry large loads in this oxygen-poor environment.

Award-winning Australian documentarian Jennifer Peedom is no stranger to perilous outdoor themes with her previous films: Solo and Miracle on Everest, both riveting accounts of challenging endeavours. SHERPA takes a humanist angle, documenting the plight of Everest’s unsung heroes and valiant enablers of every mountaineering endeavour by those that visit their native region.  With little left of their traditional farming subsistence, most Sherpas now make their living from ‘guiding’, which although lucrative for the Nepalese, is actually quite meagre in Westerners’ eyes.

For the Sherpa, Mount Everest is known as Chomolungma and is a spiritual place. The Government forbids the use of helicopters to ferry supplies to the summit so this has to be done by Sherpas and donkeys. Today’s ‘clients” expect a high standard of comfort with flat-screen TVs and morning tea served by the Sherpas at their various stations on the way up, and down. There is literally a ‘swarm’ of climbers making the ascent in a queuing system with log-jams and bottlenecks not dissimilar to the morning rush hour.

The best way to ascend the peak is via the Southern face whose most dangerous section is the Khumbu IceFall. Sherpas work during the night offering prayers to the mountain spirits before they cross this hazardous stretch of terrain, and they to have cross it frequently in order to ferry supplies from Base Camp to camps higher up, strategically placed to allow clients time to acclimatise to the altitude. Early on the morning of April 18, 2014, 16 Sherpas died on this Icefall – more in one day than had ever been killed in an entire year. Peedom’s film captures the chaos from Base Camp on fateful  occasion.

The visuals are simply stunning recorded by two high-altitude specialist cinematographers Renan Ozturk and Ken Sauls, and some aerial helicopters. The narrative then flashes back several weeks as Phurba Tashi, the Sherpa in charge, reluctantly says goodbye to his family: he may never come back alive suffering the same fate as his sister-in-law, but the family needs the money to survive.

Commentary from various experts offers context: mountaineering writer Ed Douglas and Tenzing Norgay’s sons are the most informative. Being Buddhists the Sherpas are intuitive and non-confrontational but in extremis they will protest, and a scuffle that broke out in 2013 between a group of clients and Sherpa guides where we see an American climber swearing at a group of Sherpas.

Russell Brice, who runs a large travel firm organising mountain tours (costing around 50,000 US dollars), is eager to stand by his clients, many whom are making second and third attempts, but also respects his Sherpa guides and ultimately has to make a choice between the two after the disaster takes place at the start of a busy season. Phurba Tashi choses a path of enlightenment. Jennifer Peedom’s account of what happened is simply astonishing. If ever there was a documentary thriller, this is it. MT