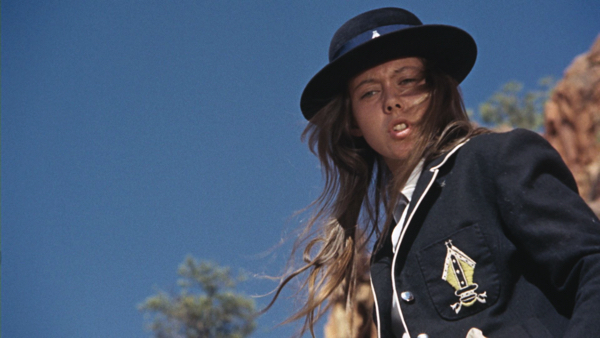 Nicolas Roeg (1928-2018) is, like his contemporary, Ken Russell, was a unique talent in British movie history, a pioneering maverick with his own cinematic vision. Whilst Russell chose to be megalomaniac, Roeg set himself apart as the man with a shuttered vision of reality: his narratives dissolve in enigmatic, opaque images, which he honed as DoP before coming to direct his first single feature Walkabout at the age of 43.

He had made his name as DoP for The Servant (1963), Fahrenheit 451 (1965) and as second unit cameraman for David Lean’s Lawrence of Arabia. Lean was so impressed, he wanted Roeg to shoot his subsequent epic Dr. Zhivago, but the two fell out over artistic differences. In Performance, co-directed by the tragic Donald Cammell, Roeg’s filmmaker’s ambition were at last fulfilled.

Walkabout, written by Edward Bond, based on the novel by James Vance Marshall mainly set in the Australian outback. Although the early city-bound scenes in Sydney feel dated in their Seventies concrete aesthetic they bookend a fantasy tale where nature forms the beguiling backcloth to a parallel universe of Aboriginal and urbanite, the outback assumes an exotic character of its own where a father (Meillon) comes to wrestle his personal demons with his pubescent daughter (Agutter) and his six-year old son John (Luc Roeg) in tow.

There he has a psychotic episode, shooting at his children, before setting fire to the car and killing himself. Jenny Agutter is epitome of naive teenage beauty instilling in her younger brother the mores of modern middle class society, but in this savage desert they soon run out of water. Their saviour is an aboriginal boy (Gulpilil) on his ‘walkabout’ (a rite of passage into manhood) who shows them how to draw water from a hidden well, and takes them to his home on a farm, having watched in shock, how white hunters killed dozens of buffalos. The two boys soon develop a line of communication, the girl is not tuned in to the subtle sexual advances of the Aboriginal boy, who does his best to attract her with  teenager a mating dance, showing off his male prowess with tragic results. The scene, in which all participants were naked, was removed, for the premiere in Cannes and following cinema run, but later restored.

In an epilogue, we see the girl as a mature married woman listening to the banal banter of her husband, and harking back in her dreams to that surreal experience in nature that changed her forever, even though she was unaware of it at the time. Walkabout works on several levels, but perhaps the most significant channels Proust’s idea that underpinned his novel Remembrance of Things Past. Youth is a dream that can teach us so much about ourselves and our vital connection with nature and the nurturing purity of a simple way of life that soon becomes clouded by sophistication, although we are unaware of it at the time, it will haunt us through our adulthood when life becomes complex and often unsatisfactory.

Roeg’s features seem to hover between dream and reality; particularly The Man who Fell to Earth (1976) and Don’t Look Now (1973). His characters are suspended in time, a case in point is Bowie in The Man, drifting in the supernatural, or seeing a mirage, in this case our planet. In Don’t Look Now, the grieving parents enter a nightmarish time warp in Venice, where fact and fiction continuously float beyond their grasp in a vain hope of bring their drowned child back to life. In Walkabout too, Roeg is his own DoP, a watery Venice is replaced by the searing heat of the Australian outback, creating a mirage of images, the kids lives become one with nature which opens up and swallow them for a time until reality bites. We are left to bring their own conclusions to the melancholic ending, when the mirror is smashed forever, and we are never quite the same. AS/MT