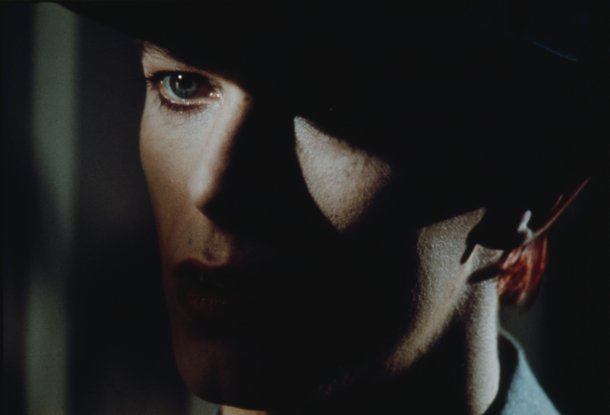 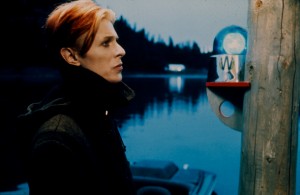 Director Nicholas Roeg (Don’t Look Now) films Paul Meyersberg’s script of Walter Tevis’ novel of the same name in eleven weeks in the summer of 1975, shooting in the desert of New Mexico, mainly around Fenton Lake.

Claiming that he never read the script, David Bowie makes his screen debut as an inter-galactic visitor in this cult classic: a heady mixture of avant-garde/ SF/drama/metaphysical satire and social critique. The enigmatic, heavily fragmented narrative, with its genre hopping and strategic cross-cutting is secondary: The Man Who Fell to Earth is a bedazzling trip into a dissociative world. The film manages to carry a slim story and no plot. Yet it manages to be consistently interesting and entertaining throughout, rather like something from David Lynch. Above all, it’s stunningly photographed. The ubiquitous sex scenes are so stylistic they manage to avoid being pornographic, although the film was considered too outré at the time of its release.

Bowie plays an alien calling himself Thomas Jerome Newton who lands on Earth carrying a British passport and nine lucrative electronic patents (one of them a precursor of digital photography). He has come to try and transport water to his dried up planet and teams up with the cynical chemistry professor Dr. Bryce (Torn) and the patent lawyer Farnsworth (Henry), to run a global enterprise, World Enterprises.

But he soon falls for Mary Lou (Clark) in a hotel in the New Mexico desert where she works as a receptionist. The two become a couple in a relationship mainly founded on sex as images of the his extraterrestrial family on slowly die of thirst. Newton then builds a spacecraft to return home, but the government takes over his company, killing Farnsworth in the process. But the emotionally aloof Newton is held prisoner in a hotel where his power dissipates, drugged on cocaine and alcohol and forced to reveal his real – sexless – body to a shocked Mary The doctors in charge make it impossible for him to return to his planet by gluing his ‘earthly’ eyes to his original ones, as he ends his life an alcoholic wreck.

Roeg’s film remains evergreen with its contempo themes of corporate greed, media intrusion and immigrant invasion and the images echo these ideas in a stream of consciousness pattern: Newton is Alice, living in a mean, inhospitable country, where alcohol and TV are used to subdue the population. He is very defenceless (as a man and an alien), a characteristic of many Roeg heroes/heroines in Walkabout, Performance, Don’t Look Now and Bad Timing. The more human becomes Newton becomes, the more he falls for human weaknesses: alcohol and emotional strife with Mary Lou. Newton is also an angel (in the messenger sense), albeit a fallen one. His reports from his home planet are clear: the same fate will befall our earth. Roeg blends a sequence with a Brueghel painting and a mournful poem by W.H. Auden, relating to it: Newton could be Icarus, haven fallen from the sky. A man of the past (singing in church with Mary-Lou Blake’s/Parry’s ‘Jerusalem’) and one of the future: in a planet full of deserts, if climate change does go unchecked.

Bowie is the ethereal outsider (he could be the twin of Tilda Swinton), he is not safe in either of his personas. Newton often has to rest, his journey is slow, he seems too fragile to survive. Clark is full of life at the beginning, but she too becomes a victim: loving Newton too much, preferring him to the money she is offered in exchange to leave him. Bryce is cynical, but very much aware of it. DoP Anthony Richmond set pieces could be from a Hockney universe. Roeg directs with a minimum of interference: when Mary-Lou talks about trains – how slow they are – she muses about the central message: our slow decay, caught by Roeg as a journey to nowhere. AS

AVAILABLE TO OWN ON BLURAY FROM 24 OCTOBER 2016