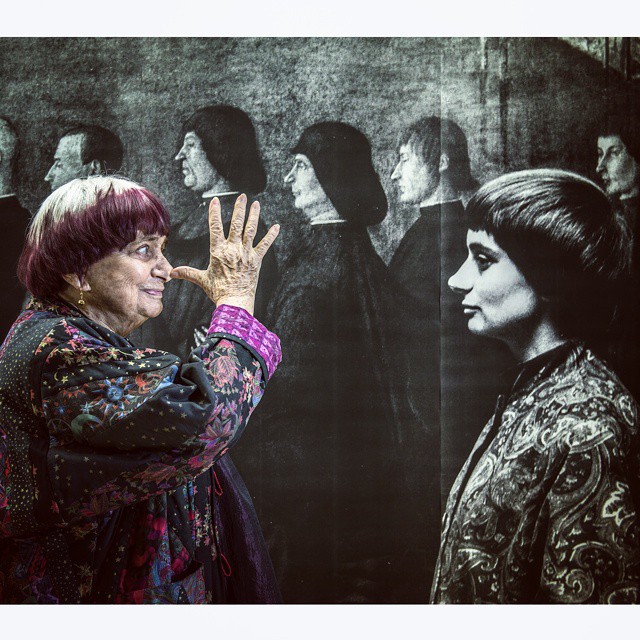 Agnès Varda’s final film plays out as a masterclass, the maverick 90-year old filmmaker talking us through her life and legacy, in no particular order, giving fresh insight into her the methods behind her genius as the pioneer of the French New Wave movement, in a meaty two hour documentary. Composed of reels of archive footage, clips from her films and newly shot material – we also get to meet the star of her Venice awarded Vagabond, Sandrine Bonnaire, the two sit in a field sheltered by plastic umbrellas, a sign of her determination to take the rough with the smooth. You could call it providence.

Born in Brussels as ‘Arlette’ Varda in 1928, she would go on to make 55 films in her fruitful career. Sitting comfortably in a classic director’s chair on a stage before her audience, Varda comes across as modest and approachable and despite her ardent feminism and trenchant intellect, amiable and quietly self-assured. Her canvas was always the familiar or domestic, filming subjects she knew about or felt deserving of attention. On her documentary style she muses: “The idea was to film people, whether they realised it or not, Nothing is trite if you film people with empathy and love”.

There are plenty of quintessentially Varda moments in this final adieu. At one point she is seen sitting on a beach surrounded by cardboard seagulls: “we love to talk to birds, but of course they don’t understand”. And her fear of playing to an empty cinema, or not engaging with the audience have enforced her belief that cinema is very much a two-way process. And Varda By Agnès is a film that is both introspective and expansively outward-looking at the same time. And with her previous outing Faces, Places having had an Oscar nomination last year Varda is pretty guaranteed to reach wider audiences beyond Europe.

Varda started life as a photographer and her pictures are testament to her frank and witty approach to life. The film takes us through the last century and into the present day starting with The Gleaners and I that showcases the freedom of digital. Her personal life is very much integrated into her work as an artist and there is much candid and unsentimental mention both vocal and visual of her partner Jacques Demy, making it all the more appealing particularly during his failing health.

Music features heavily in all her films: “Early on, I realised that contemporary composers were my allies.” And Varda certainly made plenty of allies in her work in the cinema and outside it. Her career as a visual artist has given rise to impressive installations and performance art, most noticeably in Faces Places –  and she often turned up to events dressed as a potato – her voluptuously rotund figure ideally suited for the long-running joke.

It seems both apposite and poignant that this informative career retrospective should be her last hurrah. Perfectly timed and with a sense of completion and hope Varda By Agnès is a memorable auto-biopic from the grand dame of cinema herself. MT