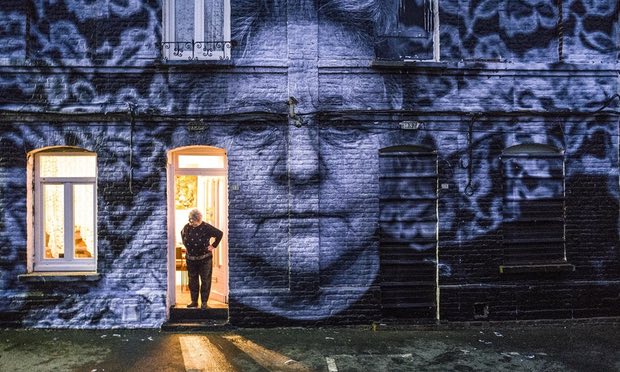 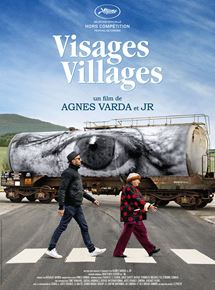 The diminutive Agnès Varda comes across as a warm social animal at the ripe age of 89.  Collaborating for the first time ever with another photographer, the Ali G lookalike and French creative force JR – possibly for his able assistance and van driving skills – the pair embark on a tour of France, not just to take pretty pictures, but as a tribute to the people they meet along the way. Travelling south from the Northern mining towns to the Midi and Savoie, their aim is to record the memory of ordinary citizens by pasting their oversized photographs for posterity, on old houses and monuments.

JR’s van is painted to look like an enormous camera, and contains a photo-booth that churns out the large photographic prints. It’s a clever idea and one that generates enormous pleasure all round. By the end of their journey, Varda will even have her toes and eyes emblazed on road tanks waggons, to carry her adventure forward. Through this interchange of photographs and conversations with locals, they visit the small towns of Bonnieux, Pirou, St Aubin and Sainte Marguerite where in conversation with farmers, postmen, waitresses and dockworkers Varda builds a special portrait of contemporary France that’s also frank and sometimes even controversial along the lines of: ‘why don’t more women drive heavy goods vehicles’, or, ‘should a goat always keep its horns?’.

Varda still has a keen eye, even though she now suffers macular degeneration and has to undergo painful regular hospital injections. Claiming that ‘chance’ has always been her best assistant she clearly has a positive view of life and reminisces over her industry friends: there is Henri Cartier Bresson and his wife Marine Franke, whose graves we visit, and Guy Bourdin whose photo ends up on a beach monument. And despite happy memories of her friendship with Jean Luc Godard, when turning up at his house for an invitation to tea, the veteran director churlishly fails to appear. MT