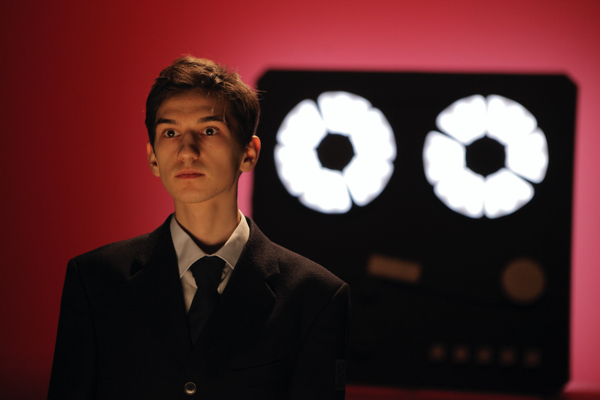 Director/co-writer Radu Jude won the Silver Bear in 2015 for his 19th century adventure drama (Aferim!) and his 2018 satire I Don’t Care If We Go Down in History as Barbarians won the Crystal Globe at Karlovy Vary. He is back in Berlin with another episode from Romanian history, a biopic of the famous Botosani teenager Mugur Calinescu (1965-1985) who chalked anti-state slogans all over the town and was hounded down by the feared Securitas, and crushed by president Ceausescu’s secret police.

Uppercase Print is based on Securitas files and the play by Gianina Carbunarius, and adapted for the screen by Jude and the playwright himself. Jude interweaves the narrative with police re-enactment sequences during the time of the case and after the fall of the regime, and domestic scenes featuring Mugur (Lazarovic) and his parents (Iacob and Zamfir). These are enriched by  newsreel and short films from Romanian State Television, giving the docudrama a convincing historical perspective.

In September 1981 Mugur was disenchanted by things in his native town of Botosani, and expressed his concern by chalking relatively harmless messages on the walls of the Cultural Centre: “We can’t take the injustice any longer… I consider we should remove it”.  Often commenting on developments in Poland, where Solidarity and Rural were formed – Mugur wanted this progress for Romania. He continued to raise awareness about long food queues in the shops and called for an end to “the filth and injustice in our country”. The messages were written in the upper-case letters, hence the film’s title. On the kerb Mugur wrote “We want Freedom” At the same time, TV images were mildly misogynist showcasing women’s beauty, all thanks to the regime.

Mugur got caught by the Securitas, and ended up in a file, code name “Pupil”. Policemen bugged the flat where he lived with his mother – his father had left the family. The secret police accused him of asking state enemies for help. And despite his efforts to apologise, the police closed in on him and his friends, his mother was pressurised in her workplace. All during this time young men were being conscripted: the Fatherland was worth any sacrifice. The class enemy in the West was accused of Human Rights violations. Mugur told the authorities be believed Romania to be a backward country, even compared to other the socialist nations.

In November 1981 school and security services got together to rule in the “Pupil” case. Mugur was regarded an enemy of the state and the Securitas cross-examination continued. A thoughtful re-enactment of his funeral ensues, his old case officers in attendance and now living happily in Bucharest, shrugging off any guilt about his fate. The authorities stated: “Ceausescu did not want political cases any more. In 1964 Mugur would have got 15 years in prison”. Mugur left the world with a dim opinion of his fellow countrymen:” My friends betrayed me, that’s the worst. I confessed so Securitas could not act indifferently. Among cowards you can’t do anything”.

Radu Jude’s sensitively crafted biopic drama pays heartfelt homage to a young man who tried to make the world aware of the social injustice in his homeland, illuminating a little known snapshot of history outside the confines of the Totalitarian State. Today Mugur is remembered as a hero by all Romanians, and it’s thanks to Jude that we all now know his story. AS