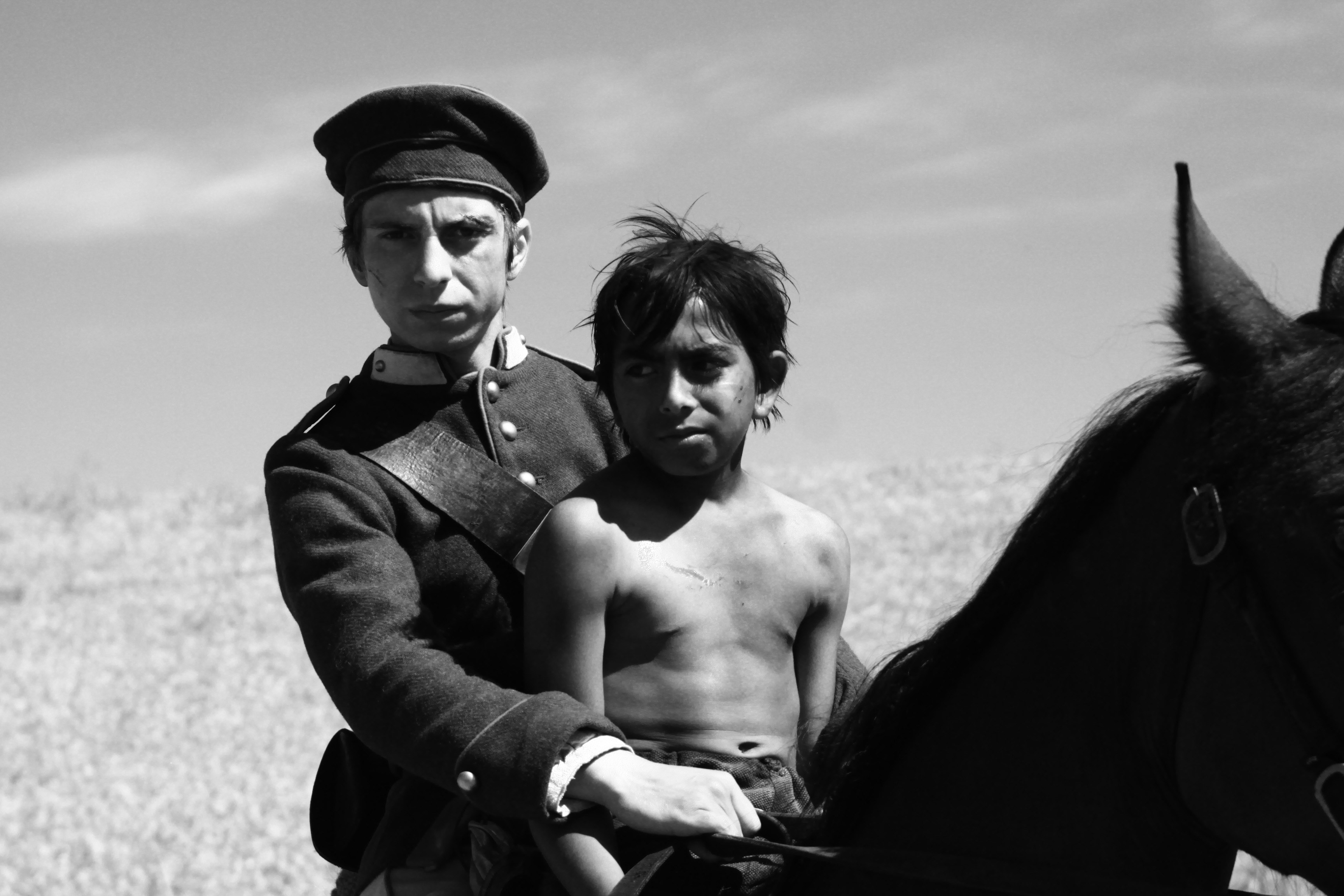 MIDNIGHT RUN meets THE THREE BURIALS OF MELQUIADAS ESTRADA in Radu Jude’s third feature AFERIM!—an unlikely pairing by which to describe a road movie set in 1830s Romania. From its opening credits sequence (lively music and foregrounded cacti) to its crisply shot rural vistas, though, there’s more than a touch of the western about this talky and occasionally very funny film, which bowed in competition this week at the Berlin Film Festival.

While a Ford or a Hawks may have felt compelled to have their protagonist transcend the moral restrictions of his time, Jude doesn’t afford his central figure such a luxury. Gendarme Costadin (Teodor Corban) is employed by a local boyor (high ranking aristocrat) to hunt down Carfin (Cuzin Toma), a gypsy who has run away following accusations of an affair with his owner’s wife. Accompanied by his son and protégé Ionita (Mihai Comanoiu), Costadin travels on horseback across the racial hotbed of feudalist Wallachia in search of his bounty, encountering various people of impoverished or inferior stations—gypsies and women chief among them.

Women and gypsies get the brunt of it in Jude and fellow writer Florin Lazarescu’s script (which, as a long list of historical texts indicates at the very end of the film, in addition to the beautiful production design and costume design by Augustina Stanciu and Dana Paparuz respectively, is the work of impressive research). Costadin refers to one woman he comes upon early in the film as a hag. Others are referred to as crows and filthy whores. Not that our protagonist is especially tyrannical. Though he claims to be “as harsh as a hot pepper, born of Father Garlic and Mother Onion”, Costadin goes about his daily routine with palpable ambivalence, making ends meet with an unquestioning deference for the prevailing status quo while admitting, in those moments of downtime he enjoys with Ionita, that “this is a dog’s life: we sweat like beasts for a piece of bread.” Later, a chemistry almost forms between the policeman and his quarry, as Costadin agrees to put a word in for Carfin upon returning him to his master—though he doesn’t quite extend such sympathy enough to free him, upon Ionita’s suggestion.

The casual, accepted misogyny that pervades the film is exemplified best by the puppet show that Costadin observes among many other onlookers, in which a male marionette beats his wife to death. Young viewers begin to inspect the motionless puppet, convinced that it’s real. Up to this point, the film has been free of explicit violence, though the darker impulses revealed in dialogue (“gypsies: are they people, or Satan’s spawn?”) prepare us for an outcome that denies a happy resolution. True to recent traditions in Romanian cinema, AFERIM! is an effectively frustrating look at how the unequal power relations of any historical period absurdly go unchallenged by those who benefit from them most.

“This world will stay on as it is,” Costadin tells his son. “You can’t change it, try as you might.” But we know different. Though inequalities still exist, the situation in Eastern Europe has changed dramatically. While it’s refreshing to see a Romanian director turning to a more remote point in his nation’s history (as opposed to, say, its search for a post-communist identity), the film speaks to the present juncture—not least of all in its authentic depiction of how gypsies were treated in the 1830s. Just as the movement for freeing gypsies (then regarded as slaves) began to gather momentum in the mid-19th century—resulting finally in the 1856 bill declaring their emancipation—we find much solace in the systematic changes that have unfolded since, and in those that are still to come. MICHAEL PATTISON