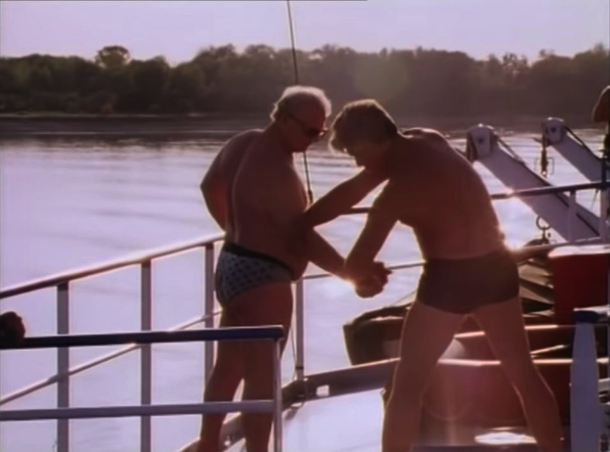 Pawlikowski adopts a similar style to Louis Theroux in his documentaries. His minimalist,  observational approach is so lowkey that the extreme Russian nationalist politician and would be president, Vladimir Zhirinovsky, opens up like a flower seemingly without any encouragement. Like most egocentric men, left to ramble on, he talks about himself and the subject he enjoys most: politics. Ranting on voluably, Zhirinovsky thus emerges a comical figure, revealing a great deal about the banal superficiality of his point of view and of his politics.

Enjoying a cruise in New York, his first break in 48 years, he confesses that he feels cheated – sitting on a beach next to a rusting tanker. He then ambushes a complete stranger and pushes him into the water. Later he admits to never being interested in the Arts, so politics seem the natural choice as a career. A self-confessed ‘romantic’ who never feeling any passion, he also claims – now sex has been an avenue of pleasure closed to him since his twenties (his buxom wife still clearly dotes on him) – all that is left for him is politics. Back in Russia, while rowing his boat on the Volga, he posits: “Politics is like a woman, and water is like a woman….you have to feel for it”. And clearly he has a way of capturing the populace with his rousing nationalist speeches thrown at amassed audiences. It appears that Russians have a penchant for these river insurrections, up and down the Volga. TRIPPING very much conjures up the essence of this Russian tradition. Unlike Pawlikowski’s SERBIAN EPICS this is a one-dimensional affair. What it does do is conjure up the Russian tradition of  wandering around the landscape, sounding off. Amusing and quite surreal. MT