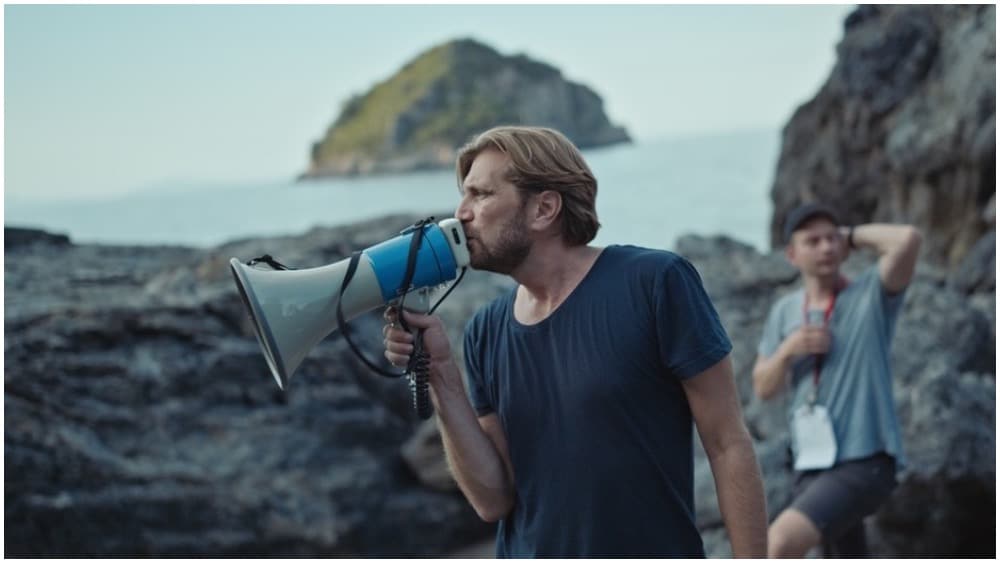 All you worst fears about luxury cruising will be confirmed in this savage satire from the Swedish director Ruben Ostlund whose disconcerting film The Square won the Palme d’Or five years ago with its lacerating look at the art world. The gloves are off with this louche and lurid takedown of capitalism and communism, social influencers, the idle rich, and the fashion business. There is no finesse here but there are laughs aplenty. In fact, no one escapes Ostlund’s snide-tongued first film in the English language. The simple statement here is that life is not fair.

The triangle of sadness is known in the model business as the frowny bit between forehead and the bridge of the nose. It’s not a good look on the catwalk. And this is where we first meet vapid model Carl (Dickinson) whose self-satisfied social influencer girlfriend Yaya (Charlby Dean) has won them a break on a luxury cruise. The two bicker endlessly over the restaurant bill the night before: they both want to be equal but their canny taxi driver gives sappy Carl a savvy word of warning on the way back to the hotel: “be careful, once she has all the power it’s over”.

The cruise throws up all the rich, unsavoury characters you care to imagine. And throwing up is very much the name of the game once the ship enters stormy waters: literally and metaphorically, under the captaincy of Woody Harrelson’ Marxist-leaning Master. Soon our motley crew are washed up on a desert island with nothing but their human wiles to sustain them. And naturally this sorts the men from the boys, the women coming out on top. An ability to fish and kindle a fire comes in handy for the Filippino ‘toilet manager’ (Dolly De Leon) who now rules the roost, a social switcheroo along the lines of ‘in the land of the blind, the one-eyed man is king”. Trading favours – sexual and financial – with the survivors understand’s human behaviour despite her hitherto lowly social position. There’s no prize here for guessing who she selects to sleep with her in the nighttime privacy of the shore-marooned lifeboat. But a trek into the mountains with Yaya will turn the tables once again and the Filipino cleaner much make the most of her place in the sun.

With its crass churlishness and whip smart scenes of political and social debate Triangle Of Sadness reaffirms the sad truth: that men and women are all beasts when reduced to lowest common denominator. It’s a dog eat dog world out there whoever you are, and especially if you’re a donkey. Go figure. MT