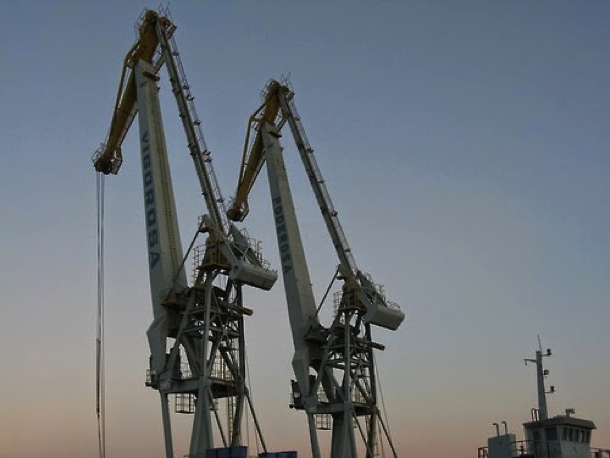 Initially beguiling but ultimately unwieldy, Pedro Pinho and Luísa Homem’s TRADING CITIES (AS CIDADES E AS TROCAS) offers a comprehensive, observational panorama of the changed and changing physical and economic landscape of Cape Verde, the former Portuguese colony off the West African coast. The film world-premiered to much applause in the International Competition at 25th edition of FIDMarseille.

Cape Verde might be most familiar to cinephiles through the work of Pinho and Homem’s countryman Pedro Costa, whose CASA DE LAVA (1994) was filmed there and whose other films often focus upon immigrants of Cape Verdean origin, living on the margins in Lisbon, with a distinctly idiosyncratic touch. No oblique techniques here, though: profitably limiting themselves to a strictly observational documentary style, the makers of TRADING CITIES paint an imagistically rich snapshot of the locale in an unfussy, down-to-earth manner that’s easygoing and uniformly intriguing even without a go-to protagonist to drive its narrative.

Indeed, this is a social fabric whose intricate makeup is enhanced by the film’s own sprawling canvas. Shooting on 16mm, the directors also assumed editorial duties for the film, and while the episodic nature allows space in which certain passages take on the qualities of a self-enclosed short in themselves, the sequences add up to a slightly repetitive whole. It’s possible that Homem and Pinho got too precious about the material, having evidently filmed a great deal and having formed an affinity to the landscape as a result.

Though the film would benefit from a trim, the temptations of an all-inclusive policy are relatable. As the opening images, of two cargo ships being systematically dismantled, show, this is to be a visually sterling work (disappointing, then, that its world-premiere screened digitally). As it unfolds, different traditions and economies are presented: farming, labouring, plastering; the sand trade, the tourist trade; a vibrant, striking street carnival. Some easy juxtapositions emerge: a thriving holiday-resort scene, as exemplified by a sequence at the local Riu complex, is followed immediately by the slums in which its employees reside.

Though never without interest—the images are certainly compelling enough, and local musicians add lively and sometimes poignant backing—such juxtapositions feel inevitable and familiar. At some point, the filmmakers need to intervene and ask: what of it? What of the tourist scene and its uneasy, problematic reinforcement of colonial relations? Such questions are most obviously absent during those scenes in which Cape Verdean dancers provide the nightly entertainment at the Riu, acting out a clichéd African-history scenario, complete with tribal body-paint and lion and leopard costumes, for the white westerners being waited upon with an endless stream of alcohol.

This isn’t to put blame on anyone, or point fingers. And, to its credit, the film itself refrains from such tones too—a rather inherently accusatory cutaway to one obese holidaymaker notwithstanding. But is TRADING CITIES meant to be a probing and investigative epic, or merely an epic tapestry? If the former, consider the nuance and complicated, no-easy-answers oomph of, say, Ulrich Seidl’s PARADISE: LOVE (2012). The holidaymaking protagonist of that film could be any one of those vacationers in Pinho and Homem’s documentary, laughing obliviously through their daily boredom-deferring water aerobics lesson. As crisp as the imagery may be, perhaps sometimes, observing isn’t enough. MICHAEL PATTISON

FID MARSEILLE RUNS FROM 1-7 JULY 2014 IN MARSEILLE, SOUTH OF FRANCE.