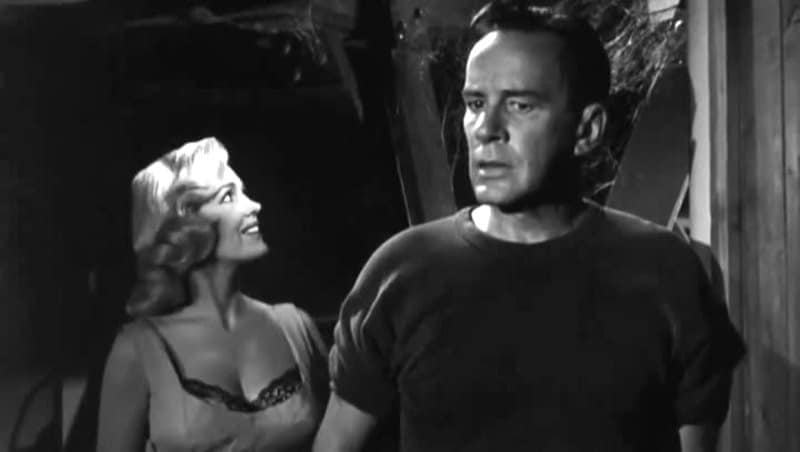 Richard Carlson always looked worried at the best of times, and he sure has plenty to worry about here. In the hands of a really creative director some of the shock scenes in this film – as when Carlson’s dead mistress gatecrashes his wedding – could have made this a classic. Instead it has Bert I. Gordon – still rocking at 99  – the very poor man’s William Castle – whose direction ironically manages to be both over-emphatic (exacerbated by an annoyingly noisy jazz score lifted from Castle’s House on Haunted Hill) while failing to generate real atmosphere. But it holds your attention for the duration and you settle down to enjoy the ride in pleasurable anticipation of the next shock effect that you know is just round the corner.

Gordon (like Castle) obviously saw and was impressed by Clouzot’s Les Diaboliques, and probably knows his Poe, since the plot in places strongly recalls the The Tell-Tale Heart, while the basic premise of a jealous dead lover who won’t lie down anticipates Roger Corman’s The Tomb of Ligeia (1964). (The presence of Joseph Turkel – now 94 years old – similarly evokes memories of his spine-chilling presence twenty years later as Lloyd the bartender in Kubrick’s The Shining.) As the discarded Vi, Juli Reding is already scary enough when still alive, as a ghost she’s in her element arranging nasty surprises like cattily dumping wet seaweed on her rival’s wedding dress. @RichardChatten