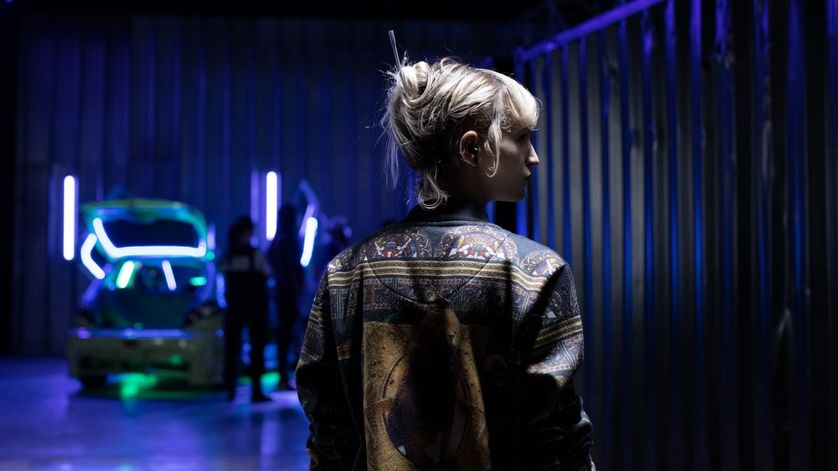 Julia Ducournau’s Palme d’Or winning female revenge thriller is a strange dark comedy: for a lot of the time you’re bored between outbursts of unspeakable violence, its tortured heroine taking self-harm to a different level after a dysfunctional upbringing forces her into a life of crime.

As a little kid we see her kicking the back of her stepfather’s carseat, a habit that drives him mad and sends the vehicle careering into a top spin leaving Alexia in need of brain surgery – she’ll bear the scars forever, physically and mentally. Performing a lap dance style routine on the boot of a car is the way she earns her living in a louche local nightclub. Her hairpins come in handy for fending off unwanted advances: one incident sees her piercing a fan through the ear spurting his brains everywhere, in another Monty Pythonesque moment she forces a barstool leg into another man’s mouth – calmly sitting on it.

French filmmaker Decournu’s film life started with Raw – a seedy vampire story about a student who develops a penchant for blood. Here stabbing is the method of dispatching victims, although one night Alexia gets rather more than she bargained for in a raunchy one night stand. All this is conveyed in a colour-popping neon visual style, awkward camera angles delivering a stylish avant-garde allure to what is basically arthouse body horror.

Tortured and troubled after her murder fest, Alexia retreats to a public lavatory where she breaks her nose on the ceramic sink and crops her hair into a boyish bob to escape the authorities. Now as man, she seeks refuge with her musclebound firefighter father (Vincent Lindon). But then there’s her bulging stomach – has she been impregnated? Again the hairpin comes in handy for firking about in her vagina in an effort to bring on a miscarriage.

Fluid in its sexuality, this is a Palme d’Or winner that ticks all the boxes virtue-signalling wis: Ducournau is only the second woman ever to win the top prize, the first was Jane Campion’s The Piano (1993). To complete the zany picture this year at Cannes, Jury President Spike Lee announced the winning title right at the beginning of the ceremony – a gaffe that transformed the show into Mel Brooks’ style comedy mayhem – pure Hollywood, but that’s entertainment. MT