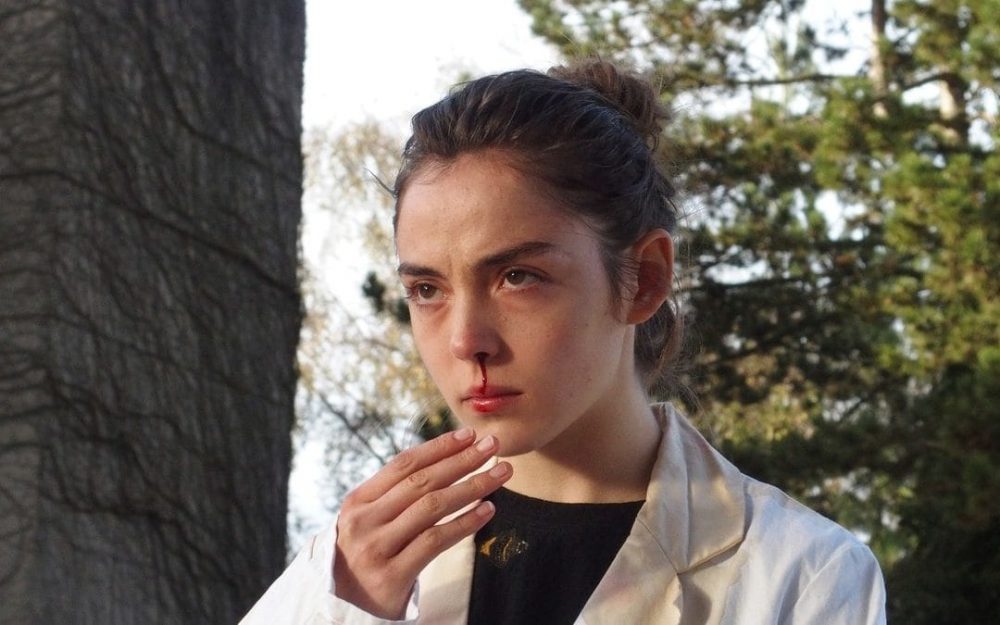 RAW has a distinctive visual style that made it one of the most refreshingly gruesome watches of 2016, scooping awards at Cannes, Sitges and London for Franco Belgian auteur Julia Ducournau. Often gory but never schlocky, her debut feature sees a young vegetarian woman struggle with an identity crisis as she completes her training to be a vet, while gradually growing obsessed by meat.

Justine is desperate to conform to her family’s expectations and fit in with her new friends but a freshers’ night hazing ritual forces her to sample raw rabbit liver, awakening her tastebuds to the temptations of flesh of all kinds – not just the animal variety. Previously committed to a diet of free from beast protein she suddenly finds herself drooling over the lusty bodies of the male students and the blood dripping from the severed finger of her close friend during a particularly challenging bout of bikini waxing.

There are echoes of Cronenberg’s body horror and Belgian cult outing Alleluia to Ducournau’s compelling mix of horror and fantasy thriller, which she describes as “a modern ancient tragedy about too much love”, Raw is both grim and bracing in its originality with a dynamite central performance from Garance Marillier (star of Ducournau’s 2011 short Junior) as Justine, the wide-eyed fresher student we first encounter spitting out a piece of sausage during a family lunch on the way to the Vet college, where they also trained decades before. An unsettling scene featuring a horse’s anaesthesia is then followed by a gruesome initiation ceremony where students are drenched in blood before their exams begin – is this from the horse? All very visceral and disturbing. The scenes that follow in her Vet college are steeped in motifs relating to bestiality and brutality.

Ducournau nips between the genres with the help of her cinematographer Ruben Impens who takes us down into a claustrophobic world of sweaty bodies and frightening procedures including one scene where Justine is plagued by a mysterious seeping rash, while mobile phones capture the zeitgeist of the student milieu echoed in a well chosen score that includes the Orties’ aptly named: Plus Putes que routes les Putes. “An animal that has tasted human flesh is not safe,” How true. This clever filmmaker has since returned to the small screen with the series Servant now on AppleTV+. MT