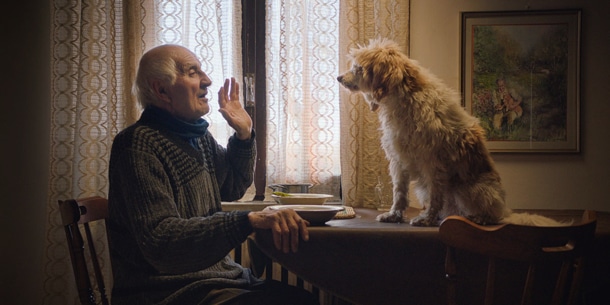 When it comes to the ancient art of truffle hunting dogs are worth their weight in gold according to a new documentary that shows how man’s best friend is also his canny breadwinner.

Truffles are prized delicacies throughout the world of gastronomy. These ugly-looking tubers are part of the mushroom family but grow underground, and only dogs have the delicate skills to root them out. A single truffle can sell for thousands of euros. Grated over an omelette or in a pasta dish they transform the most meagre meal into an aromatic banquet for the senses and a luxurious treat. Recovering this culinary treasure is a dying art that takes place each autumn in the remote wooded areas of Northern Italy’s Piedmont region.

The Truffle Hunters plays out as devotional tribute to these knobbly delicacies elevating the earthy foodstuff into a food for the Gods with sumptuous camerawork and appreciation for those who painstakingly dedicate their lives to tracking it down and cherishing its storied gastronomic potential. The film unfolds in a series of sumptuous tableaux vivants each each one glowing with wonder and delight in vibrantly vignetting the various stages of the hunt that starts with the dog and his handler, and ends in the serious business of relishing the wafer thin slivers that transform any simple dish into a fragrant delicacy.

Rather like their aged counterparts in Il Solengo the truffle hunters or tartufoli are the stars of the film, along with their treasured dogs: Birba, Bibi, Charlie and Titina, who often receive a blessing in the local church. Theirs is an ancient and revered metier – instinct, dedication and experience are the tools of the trade and Carlo, Aurelio, Egidio and Gianfranco guard their arcane methods fiercely, newcomers fearing the masters will take their atavistic secrets to the grave.

The thrill of the chase is captured in the jerky POV of the dogs as they descend into the bosky wilderness wearing webcams round their necks. For some bizarre reason some locals have taken to planting poison in the bushes so each day could in end in these dedicated dogs’ demise. This element of danger brings a tragic twist a story that celebrates the lifelong bond between the hunter and his canine colleague, the heart and soul of this foodie film that shows how dogs can also bring home the bacon – or truffle in this case. MT