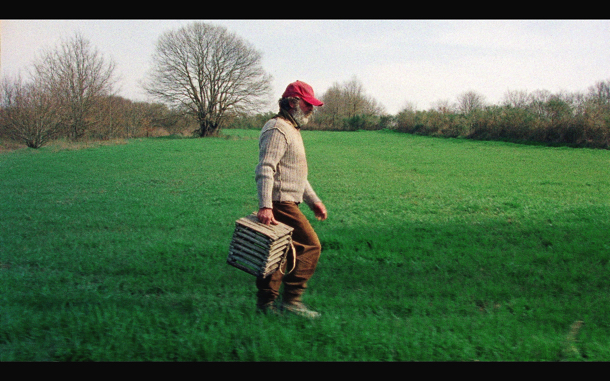 Drawing comparisons with Michelangelo Frammartino’s story of reclusiveness, Le Quattro Volte, IL SOLENGO approaches its subject from the other extreme in exploring community values from the perspective of a group of old men, (in local dialect a ‘solengo’ is a boar chased from its herd) who ruminate over the local hermit Mario de Marcello who grew up with them in nearby Pratolongo, on the banks of the river Mignone, Italy.

Alessio Rigo de Righi and Matteo Zoppis’s exquisitely framed paean to rural life and slow cooking follows these local men, all in their late eighties, enjoying a peaceful existence together drinking in a hunting lodge where we first meet them waxing lyrical in increasingly florid recollections of Mario’s secretive past and blighted childhood which began in prison where his mother gave birth to him after killing his father with a hoe (“his mother gave the evil eye, she was a witch”). Commenting on loner Mario’s standoffish attitude, they then reveal their own xenophobia by vehemently forbidding outsiders from joining their local hunt for wild boar. This is a quietly pleasing and darkly amusing film that very much connects to a global narrative of survival for small communities all over the world.

Spending their days making cheese and slow-cooked stews, these men unite in reminiscing over their joint past where 1929 and the early 1930s looms large in their collective memory as a difficult time in Italy: “if you didn’t grow beans, you didn’t eat”, and clearly this attachment to the land has shaped their community where ‘tit for tat’ self-regulation has always obviated the need for police intervention. Mario grew up a loner ostracized from the local men, he went on to experience another quiet tragedy which is revealed in the surprisingly ghostly disembodied third act of this impressive documentary that makes great use of the densely scrubby surrounding countryside in the foothills of the Alps.

Occasionally the camera catches sight of a bearded Mario wearing a red baseball cap, slowly moving through the undergrowth to Vittorio Giampietro’s sinister oboe score. At one point a snake slithers out of a crack in the caves where Mario purportedly lives underlining the dangers of the enigmatically hostile woodland undergrowth. Myths and legends seem to flourish in this remote Italian corner, passed down by old to young and where women are frequently alluded to but mysteriously absent. One old man says: “I like my freedom – home is where I sleep, but it’s full of problems”. MT