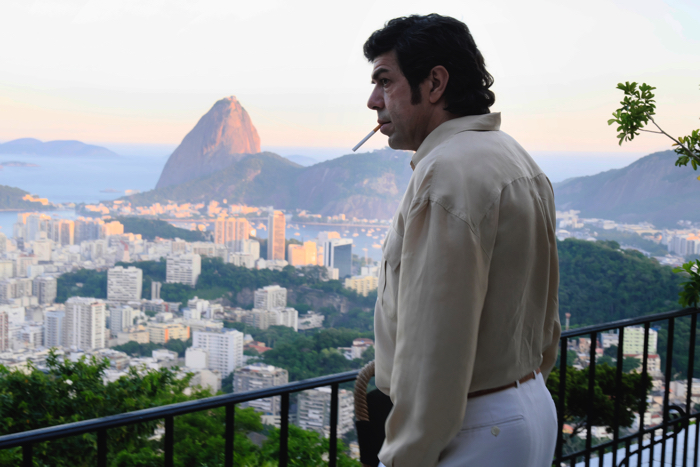 In the early 1980s, an all-out war rages between Sicilian mafia bosses over the heroin trade. Tommaso Buscetta, “boss of the two worlds”, flees to hide out in Brazil. Meanwhile back home, scores are being settled and Buscetta watches from afar as his sons and brother are killed in Palermo, knowing he may be next. Arrested and extradited to Italy by the Brazilian police, Tommaso Buscetta makes a decision that will change everything for the Mafia: He decides to meet with Judge Giovanni Falcone and betray the eternal vow he made to the Cosa Nostra.

With thundering vehemence Marco Bellocchio portrays the behind-the-scenes shenanigans of Sicily’s real-life ‘men of honour’, and although The Traitor certainly packs a punch, it somehow lacks the heart and soul of many Mafia-themed features – and particularly Kim Longinotto’s recent documentary Shooting the Mafia – in telling the story of the Mafioso boss turned informant. In explaining the inner working of the organisation, the director blends dark humour and brutal violence with vibrant set-pieces (in Sicily, Rome, Brazil and the U.S) to provide a visual masterpiece with a palpable sense of the era. The mammoth endeavour runs at two and a half hours, blending archive footage (of Falcone’s tragic death ) and entertaining court scenes that revel in the cut and thrust of the debate and the raucous ribaldry of the gangsters showing just how impossible it was actually to bring them to justice and how dishonourable they actually were – and some are still on the run.

Giovanni Falcone (Fausto Russo Alesi) once again emerges a gentleman and a diligent lawyer who garnered great respect from Bruscetta, and met his terrible end for simply doing his duty. Bruscetta is a macho man with a lust for life and love, and Pierfrancesco Favino is tremendous in the lead as this main mafioso figure who decided to testify before Falcone and appear in the mafia ‘Maxi Trial’ that lasted from 1986 to 1992. His testimony was historically crucial in implicating others and also securing him reduced prison sentences.

The action begins in 1980 when the two main Sicilian families in Palermo had decided to call a truce (Bruscetta from the Porta Nuova family and Toto Riina from Corleone). Tommaso had moved to Rio de Janeiro with his Brazilian wife (Maria Fernandez Candido) but left two of his eight children behind in the care of Pippo Calo’ (Fabrizio Ferracane), a big mistake as we soon discover.

After a resurgence of killing back home, shown in savage bloodshed, Tommaso decides to stay put, his sidekick Totuccio Contorno (Luigi Lo Cascio) surviving the massacre. But Tommaso doesn’t escape being arrested and tortured for drug-trafficking during which his wife is seen dangling from a helicopter over the bay in Rio. Extradited back to Italy he agrees to meet the authorities and  starts a dialogue with Falcone, mutual respect being the watchword.

The courtroom scenes are amongst the most stimulating in this bodyblow of a film, Nicola Piovani’s operatic score ramping up the emotional timbre. Once the trial is over, Buscetta and his family enter witness protection in Florida, but he is still determined to settle old scores, despite suffering from terminal cancer.

Naturally, this is not a film to be overjoyed about, but at least Bellocchio leaves us with a message of hope posited by Judge Falcone: “the mafia is not invincible; it had a beginning and will have an end,” MT