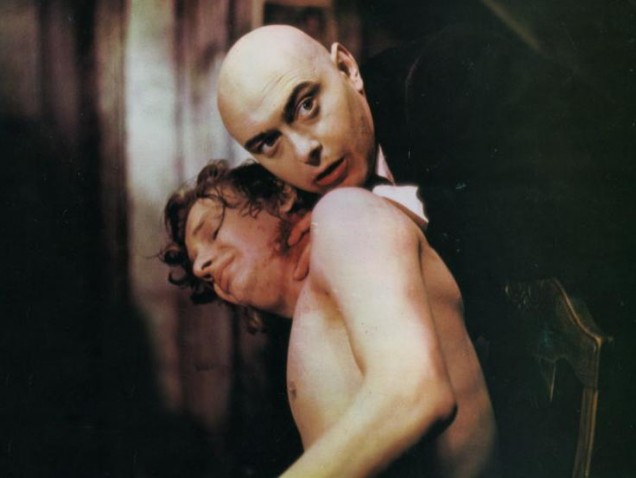 The Tenderness of Wolves is not an enjoyable film but a grisly depiction of depravity. This collaboration between Fassbinder, Lommel and Raab created a seedy and often gruesome melodrama telling the true and horrific tale of the “Butcher of Hanover” aka Fritz Haarmann. And as producer and editor (an actor), Fassbinder gives full throttle to his macabre sense of humour in his vibrant 1940s styling that explores, in often explicit detail, the 1920s life and times of the gay serial killer and his dystopian world of cannibalism with a sideline as a vampire.

Fassbinder was too busy with The Bitter Tears of Petra von Kant and Fear Eats the Soul to direct so he enlisted the help of his protege Ulli Lommel, who had a few films under his belt and went on to make the “Bogeyman” hits. Kurt Raab wrote the script and takes the part of Haarmann, looking seriously wan and ungumütlich with his pallid, shaved head adding to his scary appearance, unlike that of Klaus Kinski in Nosferatu.

Jürgen Jürges cinematography is suitably sombre and shady  garishly coloured interiors, shabby lodgings and gunmetal streets dank with rain. Raab’s script is non-judgemental, the moral message stands for itself: he merely tells the story as it is in cold-edged and often lurid detail reflecting the sad times of a Germany brought to its knees after a severe drubbing in the Second World War where young men were only too happy to earn a bob or two and restaurants only too happy to procure meat from untraced origins: his vile circle of lowlife cannibal friends were fully aware of what they were doing. Setting the film during the 192os would have been too expensive but the conditions echoed a similar aftermath to that of Germany in the mid forties.

The sight of Haarmann seducing his victims and dragging them to their deaths is repulsive enough, but your heart goes out to his victims and sinks with sadness at the depravity of it all.MT