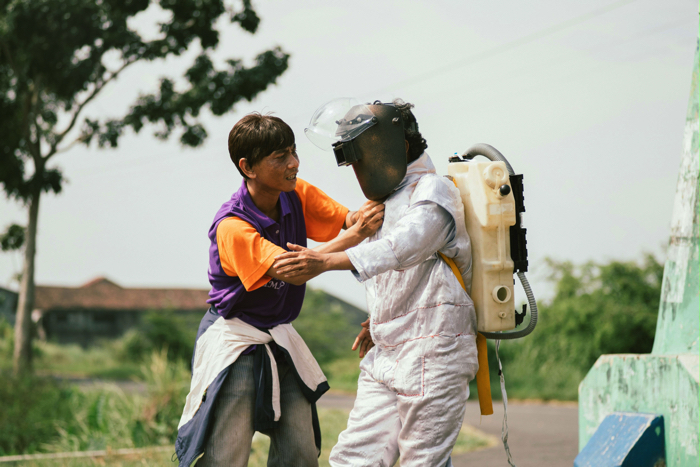 Yosep Anggi Noen (Solitude) marks the 50th anniversary of the moon landings, with a curious re-imagined fable that translocates the landmark event to Indonesia.

But this strange tale has a broader context in the scheme of things, reflecting on social injustice and corruption not just in his homeland but everywhere else where truth is clouded in ‘fake news’ and people disappearing from the face of the earth during sinister political regimes.

Noen’s  adventurous premise plays out through the story of a man called Siman who  inadvertently witnesses a foreign film crew shooting a fake moon landing in a sandy farming backwater. The authorities quickly step in and Simon’s tongue is removed to prevent him spilling the beans. What’s worse, his neighbours pour scorn on his desperate attempt to broadcast his experience – by walking in slow-motion wearing a handmade space suit – and consign him to the loony-bin, turning him into a modern day village idiot.

But the poor man’s brush with reality haunts him. And although fake news is very a much a buzz word at the moment, it is by no means a new phenomenon – the massaging of fact has been going on for decades, not only but especially in Indonesia where the bloody coup of 1965 was completely buried from the media. Conversely, there are still conspiracy theories floating around claiming that the Moon landings were actually faked by NASA with the help of Stanley Kubrick (his 2001, a Space Odyssey proved he had the lenses and technological knowhow to bring it all off), amongst other collaborators, and even more outlandishly, that the Holocaust never actually happened.

In a similar vein but more ambitious and dramatically successful is Agnieszka Holland’s recent Berlinale thriller Mr Jones that chronicles a British investigative journalist’s efforts to expose 1930s Holodomor. It does seem to prove the saying that “Let he who shouts the loudest by heard first”. And although Yosep Anggi Noen’s film doesn’t quite match up to Ms Holland’s spectacular mise on scene  it offers nevertheless a worthwhile contribution to the ‘fake news’  canon, despite its flawed finale. But you only have to go to social platforms such as twitter and facebook to realise that misinformation is more dangerous than ignorance. Just because only one person experienced reality, is doesn’t make any less real, even if that person is a simple farmer in the middle of Indonesia. MT