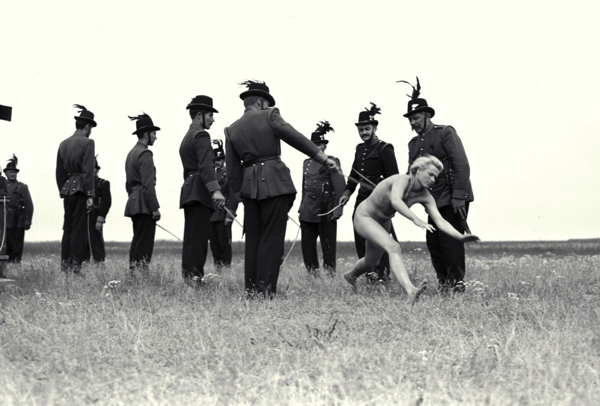 Szegénylegények or Outlaws was Miklós Jancsó’s third film. Although he had received critical acclaim at home in Hungary, this starkly realised political ballet catapulted Jancso onto the international stage where it was greeted with astonished acclaim, and competed for the Palme d’Or at Cannes where it lost out to joint winners Un Homme et Une Femme and Signore e signori (Pietro Germi).

The Round-Up (Outlaws) sees the Austrian soldiers of the much hated Hapsburg empire entrap and cross examine the guerrilla bandits whose rebellion headed by notorious highwayman, Sandor Rosza, had eventually lost its way in the last 1840s. The partisans were then weeded out and imprisoned in a remote fortress. Jancso maintains a steely distance from his protagonists blunting his own feelings of patriotism by focusing instead on the rhythm, look and tone of the piece. What we get is an elegant dance to the death crisply rendered in black and white. A naked woman runs the gauntlet as soldiers strike her with their swords (a misogynistic motif that runs through the director’s work). Men calmly jump on their own volition from the walls of the fort. A man running along the horizon is dispassionately disposed of with a single shot. Formality trumps emotion or melodrama of any kind, but the film’s formal power remains along with its ravishing camerawork, immaculate framing and graceful choreographing.

The action unfolds in the Hungarian Puszta a vast sun-baked plain that stretches to the east of the Danube – a sort of European equivalent to the American West, and this gives a Sergio Leone twist to proceedings. The Magyar partisans are dressed in their traditional garb of fur cloaks and cowboy hats and they are proud of their simple whitewashed houses that stand in striking contrast the arid steppes.