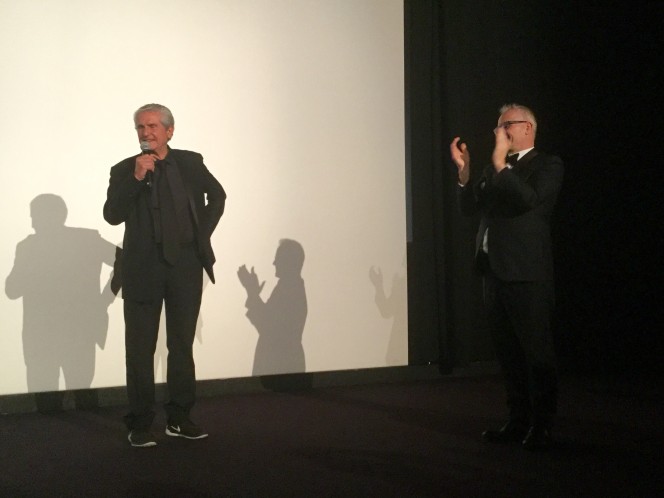 Claude Lelouch (*1937) has so far 59 credits as a director. But before and after Un Homme et une Femme, his sixth film, he has never accomplished an outstanding work; even the sequel, A Man and a Woman: 20 years Later, was a disappointment.

Lelouch will be always measured against this seemingly one hit wonder – even though his oeuvre cannot be totally overlooked. All his life, he was the proxy for Hollywood films; the anti-thesis to the Nouvelle Vague and critics and filmmakers (with the exception of François Truffaut) in his own country never forgave him for this.

At a boarding school in Deauville, two parents, both widowed, meet: Anne Gauthier (Aimée), mother of seven year-old Françoise mourns the loss of her husband, a stuntman, who had a fatal accident on set. The racing driver Jean-Louis Duroc (Trintignant), whose son Antoine is abut the same age as Françoise, lost his wife when she committed suicide, after an accident at Le Mans left him in a coma. Both adults agree that their relationship is a friendship but they gradually lose their obsessions with their dead spouses, Anne after much hesitation, and, encouraged by their children find a way to reconcile their past with a future together.

Un Homme et Une Femme is that simple. Without frills and hardly any budget: after one month of pre-production; shot with only three weeks of principal photography followed by three weeks in the editing suite, Lelouch had to rely on the emotional impact of his leading couple, and, being his own DoP, his astonishing images: a mix of 8, 16 and 35 mm cameras, and an equally originally combination of black-and-white, colour and sepia-tinged colour grading. The result is a dazzling intimacy where the rowling camera translates the rollercoaster feelings of the lovers, against their will, into a spectacular obsessive romantic pictorial broadsheet. Carried by the music of Francis Lai, Un Homme et Une femme is the ultimate romantic obsession: images, like the one of the couple meeting in the station, are part of film’s potent chemistry and history.

But Lelouch’s masterpiece has still some detractors, mainly male ones, who call it – unjustly – kitsch. The lines between the genders are drawn: after a private screening for President De Gaulle and his wife Simone, she was left in tears, whilst the general wanted to know the breed of the dog on the beach. AS