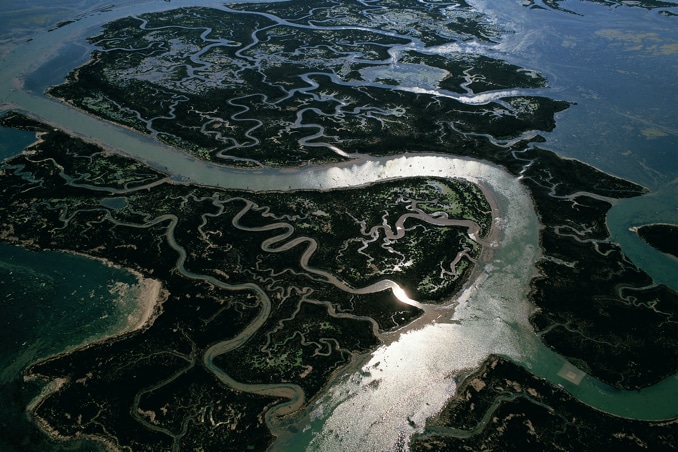 An impressive collection of river images coalesce with a mellow voice-over commentary by Willem Dafoe and music from the Australian Chamber Orchestra in this languorous companion piece to the director’s 2017 documentary Mountain.

We start in the recording studio where the chamber orchestra tune their instruments, and Dafoe looks for the right nuance of tone. Then we are literally thrown into the river, in this case a waterfall, where a canoeist struggles to stay afloat despite losing the paddles. A historical, philosophical and ecological journey ensues, the story of mankind and rivers, and how they shaped each other. The loosely formed narrative flows, oscillating between soothing and wild – just like its subject.

Feel yourself sinking into the languid images; Peedom and the five accredited DoPs filmed in 39 countries, and the result is the capture of natures’ glory, with a few ecological warnings thrown in: “It is always the poor who suffer most”, underlining images of a river polluted by plastic bottles and other industrial debris. “Rivers have shaped us as a species; they are the source of human dreams. Worshipped like Gods, humans dreamt of rivers, forces of live and death”. “But now, our Gods have become our subjects”, dams, and other irrigation measures show the changing relationship between men and rivers. Global networks of transport, connecting metropolis and their smaller brethren: “The world’s great cities all have a river at their heart”. There are mystical cloud plays, connecting the rivers to the firmament.

Rivers is a lesson in visual filmmaking, that eschews ‘Talking Heads’ telling its story visually, images are used as an argument, sometimes poetic, then again also “as wild as the river itself”. Humans rarely feature and only dominant in black-and-white archive material about the ‘taming’ of waterways. But the bursting of dams and other catastrophes show only too clearly that the power is reverting to nature. But still, “we share our fate with the rivers, we flow together”. Rivers very much follows the course Joris Ivens’ A Tale of the Wind.  Peedom is also neither reverential, nor does she agitate on behalf of environmentalists, but simply shows the beauty of ecology. The music composed by Willaim Barton, Piers Burbrook de Vere and Richard Tognetti is an integral part of the feature; editor Simon Njoo is able to harness the ebbing and flowing of the Rivers into a stream of images, into which the audience can lose itself: “Rivers change you, gradually and permanently”. AS