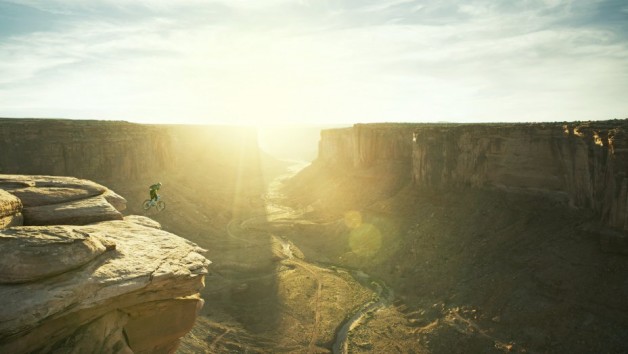 Willem Dafoe narrates Sherpa director Jennifer Peedom’s dazzling documentary about a growing obsession with mountain climbing. And for those seeking a challenge in their otherwise safe lives, scaling great heights is clearly the answer. MOUNTAIN certainly proves a terrifying watch for those who prefer to admire nature’s peaks from ground level.

Dominated by an overbearing soundtrack, this is a magnificent and vertiginous spectacle. The camera sweeps and soars over the heighest heights of the world often leaving us gasping for breath while pondering the psychological states of those who only feel alive when they are dicing with death. While Renan Ozturk’s camerawork is extraordinarily death-defying, Defoe’s gravelly narration is as craggy as a granite rockface.

The film opens in stark black-and-white, accompanied by the Australian Chamber Orchestra’s thunderous tones, before picturing a lone free climber clinging to a cliff face, exhilarated by the view around him. Peedom describes a need to reconnect with nature that began roughly in the last century when war ceased to provide the derring-do missing in these climbers’ lives. Turning historical, the film points out how the desire to conquer and break new ground all started with Hillary and Tenzing. Whereas nowadays scaling Everest has become almost like queuing on the entrance to the M6 on a bank holiday – with a better view, and a more expensive initial outlay – climbing the mountain requires financial outlay equivalent to remortgaging the house. The losers are often the poor Sherpas who risk their lives because this is often their only way of earning a living.

Apart from mountaineering in snowy peaks, dry rocky peaks are also scaled in a film that crosses continents leaving no stone unturned in the extreme sports scenario: BASE jumping, daredevil mountain biking, wingsuiting (that resembles flying around clad in a giant bat suit). Some clever dick is also seen tight-roping across two peaks in Castle Valley, Utah. Eventually we start to tire of these feats and long for serene rolling hills and gentle valleys – even at 74 minutes the film overeaches its wow-factor. And the frequent vignettes of a Buddhist monk praying feel somehow misguided considering the many sherpas and climbers who have lost their lives rather than found nirvana.. Ultimately this is an awesome undertaking from Peedom who deserves to be congratulated although her film feels more of a personal feat rather than a piece of entertainment. MT

ON GENERAL RELEASE FROM 15 DECEMBER 2017