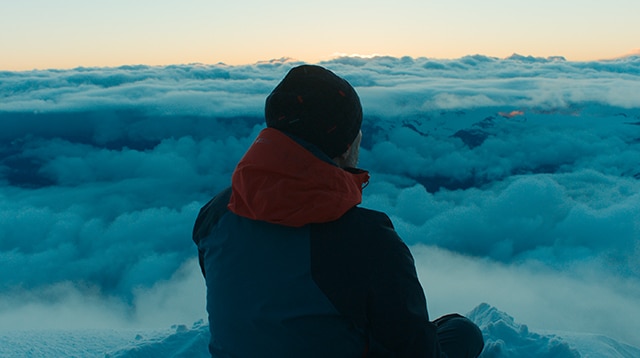 Mountains loom large in this year’s Cannes Film Festival and this sophomore feature from French director/co-writer Thomas Salvador (Vincent), who also stars, is a supernatural love story with eco undertones. Another feature exploring the power of psychogeography on the human soul it contrasts the vulnerability of its almost wordless characters with the perilous Alpine peaks of Chamonix.

The glaciers are captured with verve by DoP Alexis Kavyrchine. Aesthetically the film is an homage to the German “Bergfilme” of the 1920/30s. The film also bears a striking similarity with its eco-surreality to Julian Polsler’s memorable feature The Wall (2012) starring Martina Gedeck.

Parisian robot designer Pierre (Salvador) is meeting his business team in Chamonix, but instead of going back to the capital, he makes the rather reckless decision to embark on a climbing expedition intoxicated by the vertiginous scenery and clear air. Inviting his family to join him, he organises provisions for his stay. His mother (Chevallier) is anxious, his brother Marc (Poitrenaus) angry, but his younger sibling Julien (Mavet) just wants him to have a good time. He also connects with Lea (Bourgoin), the chef of an alpine restaurant .

The effects of climate change have profoundly altered the glaciers, literally ungluing their icy particles, and Pierre manages to catch one of them with his hand causing his right arm to glow with an x-ray like effect, and sucking him into the rocks with intriguing consequences, transforming him from nerdish robot engineer to mountain saviour.

Léa’s past is also enigmatic: she has travelled the world, only to come home again. Both Pierre and Léa are somehow other-wordily, very much in contrast to Pierre’s work colleges and his bickering family. Beguiling and beautifully soothing, The Mountain pulls us slowly under its spell. Radical in its implications, the feature retains its ambiguity, and for once the two hour plus running time is justified. MT