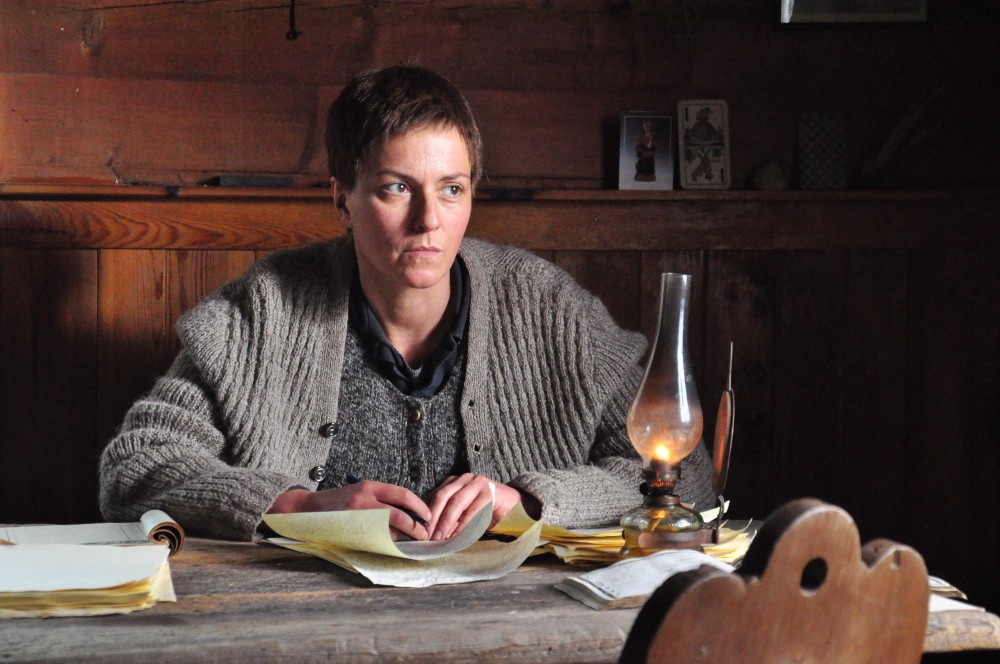 So taken was Julian Posler with German cult novel ‘The Wall’ (1963) that he waited patiently for nearly twenty years to acquire the rights from author Marlen Haushofer, and another seven years on the script that deals with personal freedom, isolation and loneliness, bearing a remarkable similarity to the experience we have all just through with the covid lockdown.

Essentially a one-hander it’s a memorable and empowering film. Martina Gedeck plays an unnamed woman in her forties who suddenly becomes trapped behind an invisible wall in the Alps. Although on the face of it the experience appears restrictive, she gradually finds strength and a new sense of purpose. Posler describes their working relationship as largely unspoken, relying on mutual trust and body language to feel out a narrative based on fear of the unknown, apprehension and bewilderment.

Filmed in the magnificently scenic landscape of the Paltental Valley in the Steiermark of Austria during the course of just over four seasons, The Wall offers some of the most striking scenery in its lush mountain setting. No fewer than nine cinematographers worked in extreme conditions from deepest winter to the height of Alpine summer immersing themselves in the natural habitat.

The narrative unfolds in flashback with periods of silence which have the therapeutic effect of allowing audiences space for contemplation without Martina’s voiceover interjecting. The silence actually enhances the film’s ability to inspire a growing of sense, uncertainty and introspection. At times, a little less voiceover would have allowed the visual strength of the story greater impact. That said, it’s an impressive piece of filmmaking.

Arriving at a remote hunting lodge in the Austrian mountains with a couple of friends, the woman stays with her dog Lynx (Luchs) while the others go in search of provisions. When they later fail to re-appear, she deciding to explore but she is suddenly hemmed in by an invisible wall that traps her near to the hunting lodge and its immediate surrounds. Escape and communication with the outside world are now impossible, but the woman draws on the healing power of her natural surroundings, animals and the changing seasons to remain calm and in control. Her impressive grounding in animal husbandry and food preparation obviously comes in handy, she fine-tunes her mindset with some deep and far-reaching discoveries. It’s an physically and emotionally-demanding role which Gedeck acquits impressively in her portrayal of survivor who manages to carry on blistered and battle-scarred to the bitter end with its inexplicably tragedy.

The highly unusual and unsettling original soundscape is based on the Earth’s magnetic field, with a few Bach partitas thrown in, enforcing the feeling of suspense and creating gravitas. This is a weirdly moving film that touches briefly on sci-fi but then broadens out into a quietly intense psychological drama that explores our complex  relationship with nature and the animal kingdom. But most of all it’s about finding power and serenity through emotional strength  MT