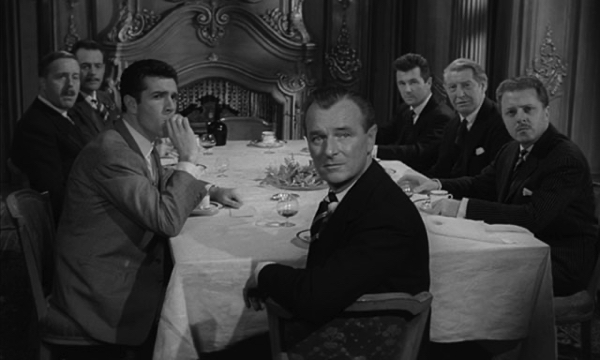 Michael Relph and his production team would provide ‘entertainments’ like this between ‘message’ films such as Sapphire (1959) and Victim (1961). Their short-lived company Allied Film Makers hit the ground running in 1959 with this slick, enjoyable early ‘caper’ film in which eight army officers fallen upon hard times pool their talents to rob a bank. The League went on to become the sixth highest-grossing British film of 1960.

No relation to the TV series, and originally written with Cary Grant in mind, it anticipated the James Bond films with its pre-credits sequence that saw the gang’s mastermind Hawkins emerging from a manhole cover immaculately dressed in black tie. In contrast to the earnestness of their ‘message’ film, The League of Gentlemen light-heartedly throws in cynical home truths about the newly affluent postwar Britain (including passing references to its activities in Cyprus and Ireland) and is gently satirical about the deference to authority still rife in Britain during the 1960s. Crime was still not allowed to pay in 1960, so the ending is a bit of a downer. But you couldn’t expect everything in those days. Richard Chatten.