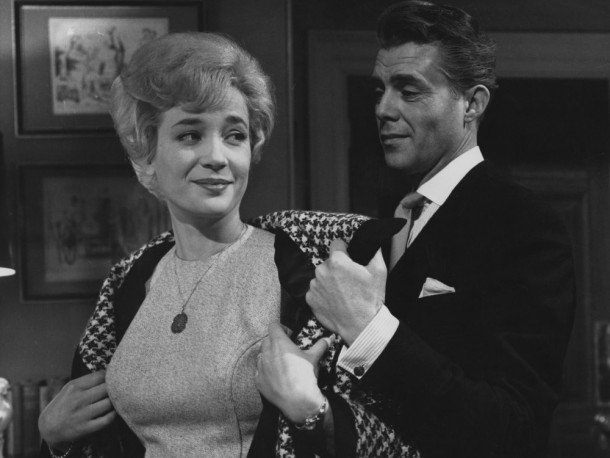 VICTIM was the second – and achieved by far the greatest impact – of a trio of topical “problem pictures” made by the team of producer Michael Relph and director Basil Dearden from screenplays by Janet Green. Sapphire (1959) had been about race relations, and Life for Ruth (1962) about religion. Of the three, VICTIM had had the most clearly defined purpose behind it, which was the repeal of the Criminal Law Amendment Act of 1885 criminalising homosexuality – described in the film as “The Blackmailer’s Charter” – as recommended by the Wolfenden report of 1957.

Janet Green (1908-1993) had read the report, and while the government of Harold Macmillan – for reasons made only too apparent by VICTIM itself – was dragging its heels, she, with her husband and co-writer John McCormick, anticipated Costa-Gavras’s Z (1969) in employing the conventions of a fast-moving, entertaining thriller to make a serious political film that packs a lot into a trim 100 minutes; embellished by handsome London locations and noirish interiors, by veteran cameraman Otto Heller (responsible for the visual impact of other classics like Peeping Tom and The Ipcress File).

It’s easy now to mock VICTIM for being dated, but politicians and other public figures today still dread the power without responsibility triumphantly wielded by our tabloid press. The role of the redtops in the fear and paranoia depicted in VICTIM is occasionally mentioned in passing; and just two years later the field day the Sunday papers had with the revelations that came out in court about the activities of our social betters during the trial of Stephen Ward vividly convey what Melville Farr could look forward to at the conclusion of VICTIM . On 9 November 1998 – over thirty years after decriminalisation – The Sun was still stoking the flames with its classic front page headline “Are we being run by a gay Mafia?”. In the United States VICTIM was refused a seal of approval by the Production Code Administration, and this remarkable passage in Time magazine that greeted its US release in February 1962 is worth quoting at length:

“What seems at first an attack on extortion seems at last a coyly sensational exploitation of homosexuality as a theme – and, what’s more offensive, an implicit approval of homosexuality as a practice. Almost all the deviates in the film are fine fellows – well dressed, well-spoken, sensitive, kind. The only one who acts like an invert turns out to be a detective. Everybody in the picture who disapproves of homosexuals proves to be an ass, a dolt or a sadist. Nowhere does the film suggest that homosexuality is a serious (but often curable) neurosis that attacks the biological basis of life itself.”

VICTIM was released bearing an ‘X’ certificate, and the era it depicts now seems as remote as the war years: a time when the police drove Bentleys and ‘phone boxes still had a button B. But anybody who considers the issues it raises moribund should remember that as I write there are about a dozen countries in the world today where homosexuality is punishable by death. One only needs look at the debate (and the language) the film continues to provoke in forums like YouTube to be reminded of how this issue still polarizes society, and that there are plenty of bigots still out there, irately convinced that they’re being muzzled by political correctness; “our crime”, as Lord Fullbrook puts it, “damned nearly parallel with robbery with violence”. While Eddy complains that “Henry paid rates and taxes…but they knew he couldn’t go out and call the cops”, it’s interesting to be reminded that one of the blackmailers accused the police of “Protecting perverts” even when homosexuality was illegal, and back in 1961 could firmly be of the opinion that “They’re everywhere, everywhere you turn! The police do nothing. Nothing!!”.

VICTIM goes out its way to avoid sensationalism, and it is precisely because it in every other respect so resembles a conventional black & white crime film of the period that one can still feel the shock audiences must have experienced in 1961 when Inspector Harris deceptively casually asks Farr “you knew of course that he was a homosexual?”, followed by the eye-watering statistic that at the time “as many as 90% of all blackmail cases have a homosexual origin”. If it seems too genteel for 21st Century tastes, the scene in which Derren Nesbitt wrecks Charles Lloyd Pack’s shop still provides a literally shattering reminder of the barely contained physical violence always ready to rear up from behind the prejudice now known as “hate crime”.

The casting of Dirk Bogarde makes the film what it is. Several other actors (including Jack Hawkins, James Mason and Stewart Granger) had understandably already turned down the role, but Bogarde accepted without hesitation; and on so many levels the film is inconceivable without him. (Anyone who thinks it was the first time he’d played a homosexual onscreen, however, plainly hasn’t seen the film he made immediately prior to it, The Singer Not the Song.) Almost as bold on Bogarde’s part was that in VICTIM he was for the first time playing his age – 40 – although this is more than compensated for by the fact that he never looked more debonair and distinguished than he does here. The entire cast obviously cared about their roles, right down to the smallest parts (as frequently happened in those days, veteran character actor John Boxer as the amiable policeman attempting to comfort Boy Barrett in his cell, and John Bennett – who in the opening episode of ‘Porridge’ was the prison doctor who asked Fletcher if he had ever been a practising homosexual – as “the bloke in the pinstripe”, make vivid impressions without being included in the cast list at the end). Although the blackmailers themselves are often described in accounts of the film as “a ring” or “a gang”, there in fact turn out to be only two of them; a pair of bloodcurdling ghouls worthy of the Addams family – the grinning, cheerfully amoral Derren Nesbitt and his vengeful associate piously convinced that “Someone’s got to make them pay for their filthy blasphemy.” As Inspector Harris (a superb performance by John Barrie) says to his stern Scottish sergeant (John Cairney), “I can see that you’re a true puritan, Bridie…there was a time when that was against the law, you know.”  Richard Chatten