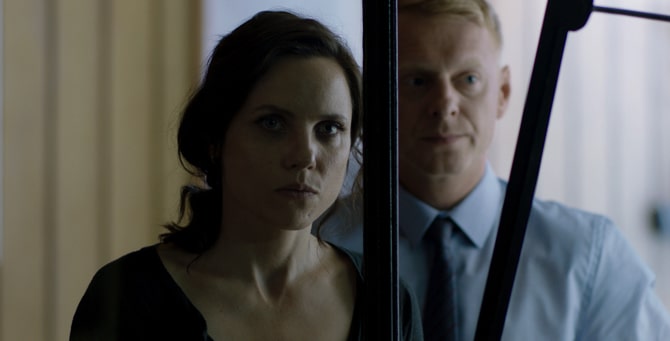 The coal mines of Silesia form the gritty backdrop to this fraught menage a trois drama that sees two men caught up by a scheming femme fatale.

The Iron Bridge is a first film for Poland’s Monica Joran-Mlodzianowska and certainly makes a strong moral and ethical statement as the opener of this year’s Kinoteka Polish Film Festival  –  now celebrating its 18th edition, online.

Julia (Kijowska) is desperate for a child with her partner Oskar (Lukasz Simlat from Never Gonna Snow Again). But Oskar is suffering fertility problems so an affair with his boss and close friend Kacper (Bartlomiej Topa – star of Three Colours White) seems the natural solution. In order to keep Oskar busy while the two have fun, Kacper sends his friend to the deepest and most distant coal seems, where inevitably disaster strikes during a tremor. A nail-biting rescue operation is launched with Kacper’s friend and collegue Mikolaj (Konopka) coming up with an ingenious plan to save Kacper’s face and Oskar life.

There is plenty of dramatic potential here and Joran-Mlodzianowska mines it to great effect along the lines of Poland’s cinema of Moral Anxiety from the ’70 and ’80, clearly she had Kieslowski’s Dekalog in mind. The flaws are those of inexperience: a fractured narrative that breaks the tension along with lengthy flashbacks and clunky dialogue. DoP Piotr Kukla saves the day giving the film some flair and formal elegance with his subtle camerawork. AS