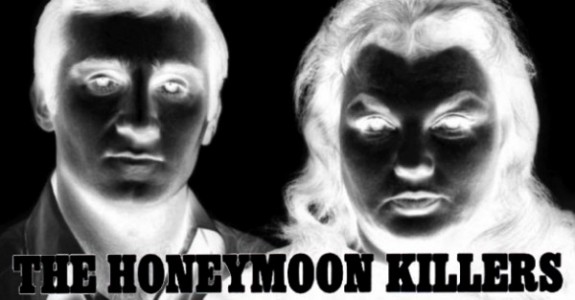 Leonard Kastle’s classic sixties Noir thriller THE HONEYMOON KILLERS  exposes the unsettling crime of Martha Beck and Raymond Fernandez who were executed for murder at Sing Sing Prison, in March, 1951. The gruesome couple were in some ways the American predecessors of Fred and Rosemary West except their victims were older women rather than young girls, and their motive was money.

The hard-faced, stolid Shirley Stoler plays the obese, frustrated spinster Martha. Cooped up with her needy mother she is embittered by a string of unsuccessful romances and working as a matron in the local hospital when we first meet her, reprimanding a couple of nurses who appear to be canoodling in a cupboard. Desperate for affection, she joins Aunt Carrie’s Friendship Club and strikes up a relationship with Ray Fernandez (Tony Lo Bianco), a darkly handsome smooth-talker who seems too good to be true. And he is. Tony turns out to be a con man with a sinister past. Shot in stark black and scored with the sonorious tones of Mahler’s Symphonies, THE HONEYMOON KILLERS makes for troubling viewing. The toxicity of the gruesome duo gradually permeates a story of murder and malice in which lost souls become lethal in a partnership that goes from to strength to strength.

Staying close to the true crime story, Kastle explores their relationship up until the trial, proceeding with clarity and precision in a drama in which victims and perpetrators are physically and emotionally unappealing. Even Tony Lo Bianco’s good looks gradually pale in comparison to his vile obsequiousness: yet Martha exerts an inexplicable hold over him, given her physical and personal unattractiveness. Both give stunning performances, the most unsettling aspect of which is not only their ease at switching between charm and coldness but also their magnetic screen chemistry which seems to be at its most potent immediately following brutal behaviour towards their victims: immediately after viciously murdering their final victim, the couple indulge in some passionate love-making. Violence seems to fire up and fuel their sexual appetite, almost acting as an aphrodisiac.

Martha is a more controlled psychopath than her counterpart Gloria, in Fabrice Du Welz’s drama Alleluia, a looser 2014 adaptation that transposes the story to contemporary Belgium. While Stoler is constantly teetering on the edge of insanity with her performance as Martha. Lola Duenas’ Gloria is sexually out of control and completely unhinged with jealousy by Michel’s power over women, whilst Martha is more enraged by the victims’ emotional closeness to Tony than by the physical rapport he has with them. Tony here appears less keen to develop a relationship with the women, and more dispassionate about their welfare when Martha derails their nascent romance. And being a nurse in the early 1950s, Martha is more powerful because of her medical expertise and knowledge of sleeping drugs. THE HONEYMOON KILLERS is an intimate-feeling chamber piece with a more clinical, procedural approach than Alleuluia, which is an unbridled love story between the two people who end up killing violently because one of them (Gloria) becomes uncontrollably jealous of the other’s motives. In THE HONEYMOON KILLERS there is never any doubt of Martha’s confidence and mastery of Tony. Oliver Wood’s cinematography makes this occasionally front lit piece striking and beautiful despite its ugly subject matter.

Where THE HONEYMOON KILLERS is weak lies largely in with its rudimentary sound recording – odd with Kastle being a composer – possibly due to its low budget, but given that most of the action takes place indoors, USD 150,000 seems quite reasonable. None of the cast were big screen stars: Lo Bianco coming from a TV background had just filmed Star! with Julie Andrews, and Stoler was making her screen debut at the ripe old age of 40. Photographed in black and white, with fairly rudimentary and at times quite poor sound recording – largely its only downfall Lighting largely came from natural sources given THE HONEYMOON KILLERS very much the feel of an indie debut outing, which it was, as Kastle had previously been a TV composer and has never completed another film.  Gustav Mahler’s symphonies are also an strange choice for the score – the triumphant, classical quality completely overriding the sinister nature of the seedy, suburban narrative. MT