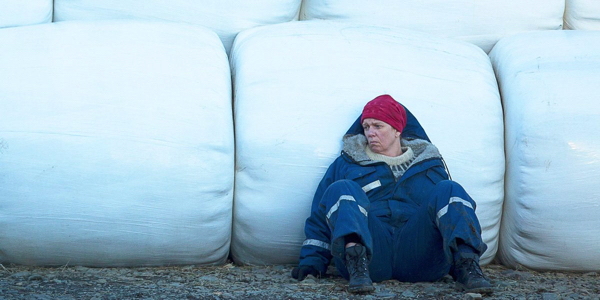 Grímur Hákonarson’s Cannes UCR award-winning debut Rams (2015) was a dour and delightful tale on sibling rivalry set in the Icelandic farming community. The director returns to this sombre milieu for his second more serious drama that sees a farmer take on the corrupt and outdated co-op in her local community.

Inga (Arndís Hrönn Egilsdóttir) is a single-minded independent farmer who works tirelessly with her devoted husband Reynir (Hinrik Ólafsson) to make ends meet in the harsh but spectacular landscape of Iceland. Although the couple are wedded to their local co-op system, it is becoming increasingly difficult for them to remain competitive with their rivals. After an unforeseen tragedy Inga is forced to reassess her life and bravely decides to take the co-op on by using the help of social media rather than her less than supportive neighbours who are an unadventurous and conservative lot, even when life is stacked up against them.

Icelandic women are well known for their business acumen and Egilsdóttir supports this with a remarkable performance as the indomitable farmer in an engrossing drama that reunites the director with Sigurður Sigurjónsson who plays the co-op’s cunningly cocky director. Although this is a less entertaining film than Rams, Hákonarson once again emerges as an assured and confident voice and one of the country’s finest filmmakers. MT