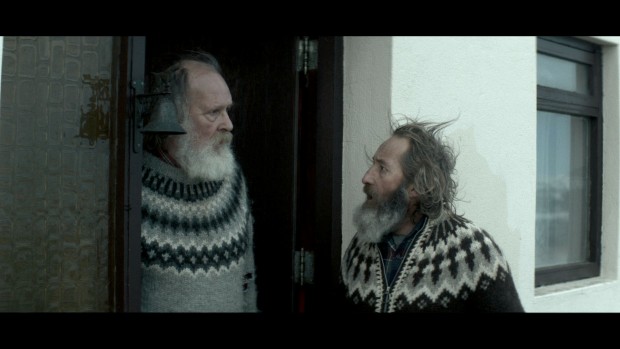 The startling minimalist splendour of Iceland is the setting for this dour but touching tale exploring how blood is thicker than water in a remote farming community where the largely male inhabitants strive for self-sufficiency. Summerland director Grimur Hakonarson’s RAMS has echoes of the recent Of Horses And Men and Village at the End of the World. Two estranged but neighbouring brothers, Gummi and Kiddi, each own a flock of sheep but have not spoken for nearly forty years. Gummi is a reserved but decent man who prides himself in his animal husbandry and expert care of his flock on the snowy foothills of central Iceland. Occasionally, his brother takes a drunken pot shot at his farmhouse, particularly during the annual competition where their prize rams compete for a trophy.

Hakonarson brings his extensive documentary experience to this windswept story that pictures these bearded and weatherbeaten old men toughing in out in the hostile terrain and their hand-knitted, fairisle jumpers. Clinging to past traditions with his beloved family of sheep and faithful shepherd dog, Somi (Panda); Gummi proudly eats his Christmas dinner alone in candlelight with Christian hymns playing softly in the background. But his brother becomes a liability when his winning ram is found to be suffering from ‘Scrapie’, a dread disease that spreads like the plague and requires the slaughtering all the local flocks. Whilst compensation is due from the authorities, this is the last straw from many of the islanders, so Gummi decides to take matters into his own hands to secure his livelihood.

Despite its sombre tone and windswept landscapes, RAMS is full of wry humour especially in the scene where Gummi scoops Kiddi’s drunken body out of the snow and drops him from a fork lift truck outside Casualty at the local hospital. Sigurjonsson gives a heartfelt performance as Gummi, and Atli Orvarsson’s muted accordion score adds a touch of local charm to this melancholy but heart-warming story of brotherly conflict in a community struggling for survival. MT