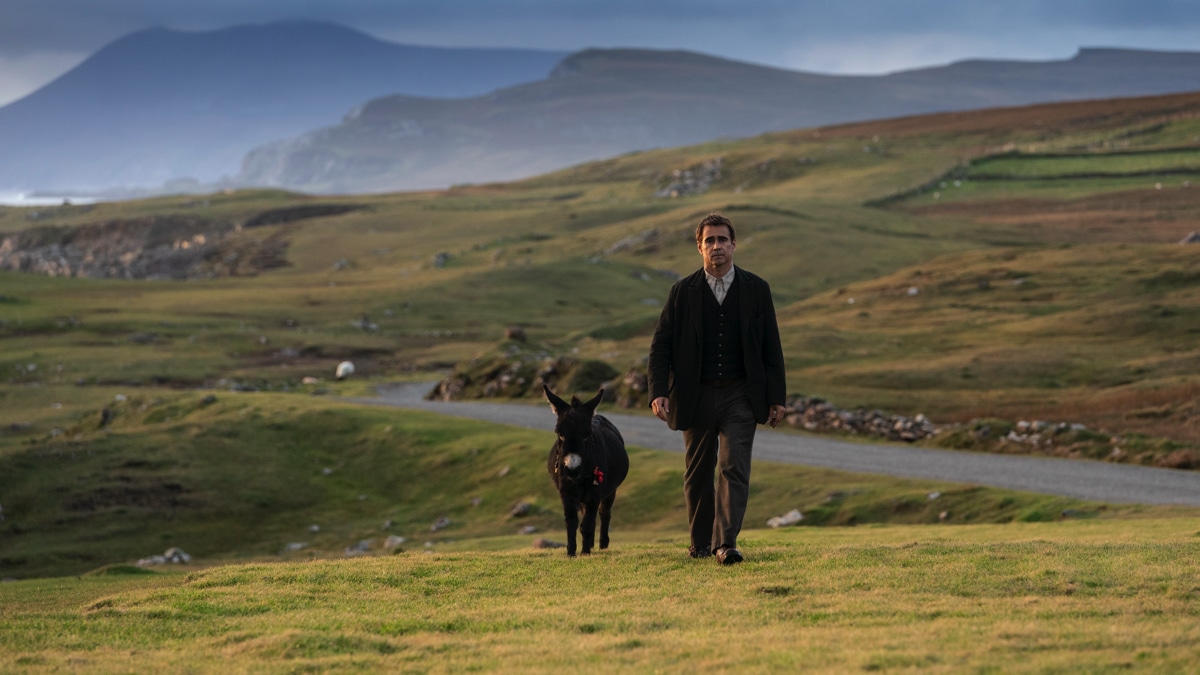 Colin Farrell and Brendan Gleeson star in this big screen bittersweet dramady that reunites them with In Bruges director Martin McDonagh completing his “Aran islands Trilogy” of plays set in the early 1920s during civil war. The first two stage outings: “The Cripple of Inishmaan” and “The Lieutenant of Inishmore” had been a great success in theatres McDonagh opted for a   film version for this final part that never quite escapes its stage bound origins, although the drole deadpan humour saves the day along with the natural beauty of the emerald island landscapes of Inishmore.

Colm (Gleason) and Pádraic (Farrell) have always been the best of buddies. But one day, out of the blue, Colm calls time on their friendship for no apparent reason apart from wanting to spend the rest of his life with his fiddle and his border Collie. There is no place for Pádraic any more. End of story. And the last straw is an incident with Jenny, Pádraic’s mini donkey.

But Pádraic is having none of it and gets his sister Siobhan (Condon), and Barry Keoghan (Kearney), the unstable son of the hated village policeman, to beg Colm to reconsider.  It all comes down to Colm threatening to cut off one finger at a time if Pádraic ever speaks to him again. Siobhan takes in these wider implications brought on by the battle raging on the mainland, but the men go, as men do, for all out victory – or nothing.

The allegory of civil war is clear, but the hostilities always take a back seat in Banshees. The focus here is on personal relationships , and about how friendship can often turn to hatred overnight, usually rippling out from a petty slight or disagreement, the fault line for deep-seated resentment, the straw that breaks the camel’s back, or this case the donkey’s. McDonagh gradually fleshes out his three main characters but never enough to explain the war of attrition between them. Regret, sadness or a simple lack of fulfilment is channelled out into the open, into hurting the nearest and dearest, and the injured party is left bewildered and bereft.

The Banshees of Inisherin met with critical success and an award for Colin Farrell and “Best script” for McDonagh in Venice 2022. The pointlessness of war comes home on a human level through the sheer inanity of the broken friendship. It’s silly, childish and without real grounding. And McDonagh showcases this vacuity through the solemnity of his drama that unfolds like a procession without any core belief. The formal brilliance of the confrontation is based on trivial home-spun philosophy. Underneath the smouldering fractures, there is a vacuum – and that is the pity of war.