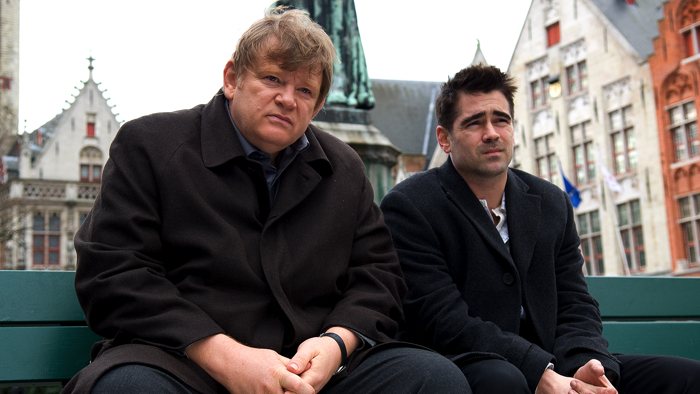 I don’t think I’ve ever laughed so much and so continuously as watching In Bruges. The sheer outrageousness of it all is enough to raise a smile whenever you think back to it. Although Woody Allen’s All Time Crooks and most of his other comedies certainly beat it on wisecracks and clever dialogue, Martin McDonagh’s script epitomises the sheer pissed-offness of a couple of sweary Dublin hitmen who fetch up in the Belgian town after failing abysmally to bring off a job set for them by their ridiculously snarling boss Ralph Fiennes (as Harry) – playing out of character – in his finest comedy hour.

There’s nothing to be proud of in the sweary humour but it’s infectiously funny for most of the film’s running time. Colin Farrell and Brendan Gleeson play Ray and Ken, who have been ordered to lie low after the fiasco – in Bruges. Shoot the breeze, enjoy the architecture and wander round generally taking in the atmosphere. To makes matters worse they are to share a tiny, twin room in a B&B – but milling about just isn’t their style, it queers their pitch and generally leaves them back-footed, appalled at themselves and each other, the whole situation is ludicrous, and they moan and rant as they mooch about aimlessly, quite out of place in this quaint, romantic hideaway where everyone else is enjoying themselves. Not them.

Martin McDonagh’s directs with easy aplomb. Farrell explodes when a man with an American accent complains about their cigarette smoke – although smoking was still quite legal at the time, in Bruges. Farrell then meets sexy single girl Poesy, and the story reaches a natural, successful conclusion. A real one-off, but a memorable one where everyone rises to the occasion. MT

OUT ON BLURAY ON 19 APRIL COURTESY OF SECOND SIGHT FILMS