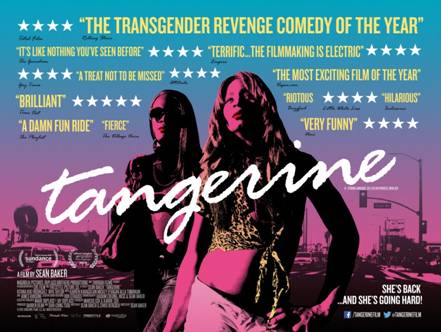 TANGERINE is what you’d expect from a slice of downtown Los Angeles street life seen through two black, transgender prostitutes: spunky, raucous and rude. But the disenfranchised characters in Sean Baker’s microbudget indie hit are always warm and good-humoured. Shot entirely on iphones with the use of anamorphic adapters, and no worse off for it, TANGERINE bristles with a vibrant street energy and a freshness that reinvents its Highland setting of donut parlours and meaningless malls with a jaunty score composed of ambient, techno, hip-hop and even Armenian folk music.

Baker’s 2012, Starlet, pictured the unusual pairing of an old woman and a porn star in-the-making and TANGERINE offers a similarly sleezy snapshot of a Christmas Eve in LA where cross-cultural denizens rub along – but only just. Sin-Dee Rella (Kitana Kiki Rodriguez) is celebrating her release from a spell in prison to discover that her pimp and boyfriend Chester (James Ransone) has been unfaithful with a white woman. Her best friend Alexandra (Mya Taylor) breaks the news over donuts and coffee, and the two venture forth in a ferocious ‘no holds barred’ onslaught to track down the culprit Dinah (Mickey O’Hagen), who they then pounce on in a local brothel.

And while Alexandra is touting for custom for her singing soirée at a local club, Sin-Dee is dragging Dinah around town by the hair.  The Armenian element comes from a parallel strand involving a bisexual taxi-driver, Razmik (Karren Karagulian) whose customers include a native American with a headache, a woman who has just had her dog put down and a couple of guys who throw up on the back seat. Married with a baby, Razmik has a penchant to blowing trans-gender prostitutes in his passenger seat. It emerges that the going rate in LA is $80, but Alexander gives a 50% discount to a local punter “cos it’s Christmas Eve”. But only if he comes quickly!

When Razmik tries to escape the family Christmas lunch, his mother-in-law (Alla Tumanian) and wife Luiza Hersisyn), inject a note of old school tradition putting the story firmly in perspective, and they all cross paths in the donut diner where Sin-Dee is having a showcase showdown with her slipper ex (James Ransone), Dinah still in tow.

This upbeat, feelgood farce certainly tells it like it is, with a script that has been cobbled together with interviews and ideas from local transgender prostitutes, to give authenticity. Performances are dynamite across the board, especially from Sin-Dee who is appealingly sassy in a blond wig and white shorts. Never hard-edged or malevolent, TANGERINE retains a natural humour reflecting the pride and dignity of both locals and sex workers plying their trade in this shady part of sunny LA. MT