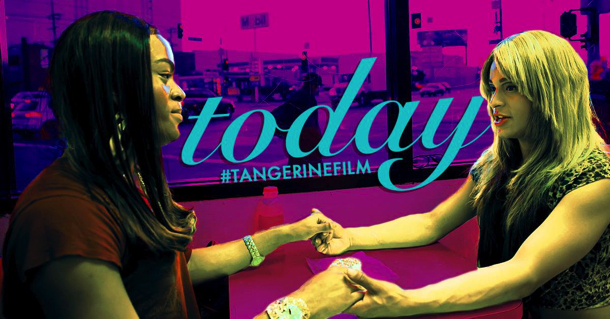 Capturing the moment is exciting but it comes at a price. That much is evident when I walk into the room at the Mayfair Hotel to meet Sean Baker and Mya Taylor, director/writer and co-star respectively of breakout US indie hit Tangerine. Mya, elegant despite the strain of endless media engagements is commenting on her schedule for the day: “23 interviews, 2 photos shoots and 3 Q&As right?” She turns to Sean, a slender figure dressed in black, for confirmation. He’s on his way out as he answers: “I don’t know but suddenly my bladder is about to burst. Can you start and I’ll be right back?”

With TANGERINE making its bow at the 59th London Film Festival in the evening, I’m the 15th journalist wheeled in front of them already and its only lunchtime. They bear me graciously, even if Mya only acquiesces to Sean’s brief absence on the proviso I don’t ask any dull questions along the lines of how she met him. Incidentally, he discovered her at an LGBT centre around the corner from the notorious Red Light district of the Santa Monica and Highland intersection presented in the film. Not that I asked of course! 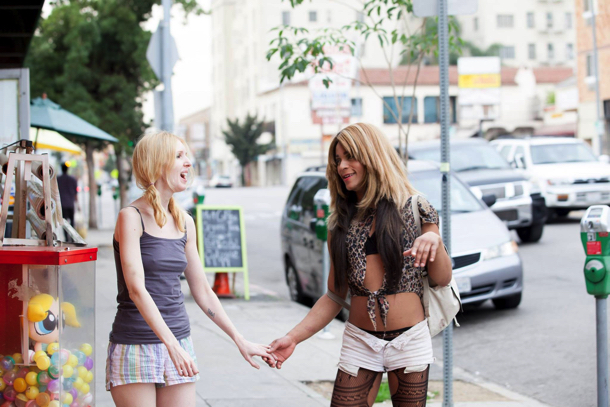 From the streets of LA, she now faces different challenges. Having to work through the same repetitive questions clearly takes a toll for a start. “Journalists ask the same shit over and over and over. Like I just answered this shit, it’s in magazines. Why don’t you just read about it and put it in your interview.” She can turn on the charm when she needs to though. “Actually, you English people are so much cleverer with your questions. You guys are smarter than Americans.”

The furore around TANGERINE is both a surprise and somehow expected given the growing prominence of transgender issues in the mainstream media this year. The film follows two transgender prostitutes, played by Mya and Kitana Kiki Rodriquez, as they wander the streets of LA on Christmas Eve dealing with a collection of quirky characters during the course of the day. Shot on iPhones with a hyper-real feel and an impressive soundtrack, it’s high tempo, energetic madness that proves utterly irresistible. Don’t just take my word for it. Magnolia Pictures who snapped up world distribution rights at Sundance in January are even planning an Oscar push for Mya and Kitana, which would make them the first transgender actresses to receive nominations if all goes to plan. 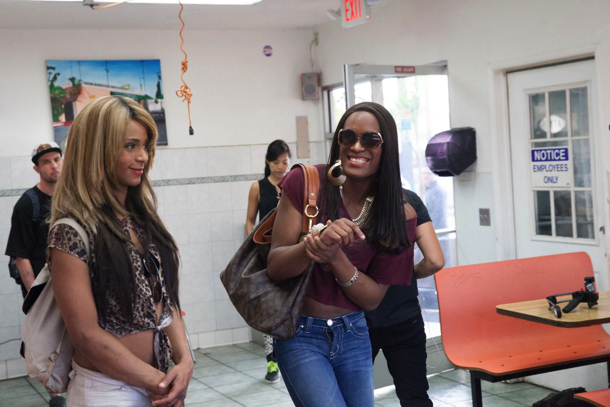 Academy award glamour is a far cry from the world presented in the film, as Mya knows only too well after moving to LA at 18. “I used to be in that world. I couldn’t do much with my life even though I was trying. And now I’m an actress and known everywhere and I’m in a totally different life.” She sounds amazed but it has been kind of amazing. She’s also clear her past is a way of life she’s happy to leave behind. “It’s something you want to be away from, I guess because it’s so miserable. There was a time when I was homeless and I had to sleep inside men’s sex clubs. There’s a risk of a man trying to touch you and have sex with you. You’re trying to sleep and there’s loud music playing and people having sex everywhere. It’s nasty.”

Sleeping inside sex clubs isn’t even the worst option. “There was one time that I slept behind a dumpster because I didn’t want to be bothered. I thought the police would probably come if I was on the sidewalk. But it was so uncomfortable that other times I’d stay up all night and walk around and sleep inside the youth centre the next day. I’d get like four or five hours of sleep a day.”

At the mention of youth centres, I wonder whether there are more options now available to help people stuck in Mya’s former situation. The answer is mixed. Mya feels LA offers the most help of anywhere she’s been, but youth centres don’t address all the problems. “Think about this; if I’m up all night and I go to the centre the next day to sleep, my whole day is gone right there. You can’t accomplish anything because you’re trying to sleep. It’s the same cycle every day for a lot of the transgender girls.” Even when they can find somewhere to catch up on sleep, discrimination is never far away. “When transgender girls do actually go interview for jobs they get turned down because they’re trans. I just went to get my ID changed to say my gender is female. It will be finalised next August [we’re in October 2015 now]. Let’s say I go to an interview and have to give them my documentation. If they see I’m trans I won’t get hired. That’s just how it has been. Whether you’re pretty or passable, if that information isn’t changed, or if they just know you’re trans, you won’t get hired. The best thing to try and do is live stealth so nobody knows.” 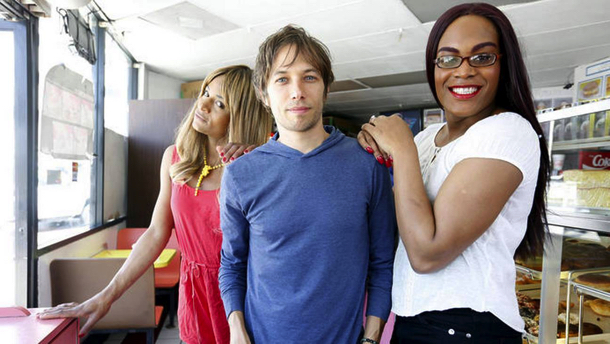 There is hope that change is coming at last. Sean seems upbeat over what he’s seen. The 44 year old filmmaker, a stalwart of the indie scene after four previous features and a gloriously odd puppet sitcom Greg the Bunny threw himself into Mya’s old world when developing TANGERINE and still keeps tabs on it. He seems excited that the LGBT centre where he first discovered her now has a department dedicated to transgender people. “I think they’re doing a whole employment thing. It seems with the recent awareness that existing foundations are putting targets in place to help trans people.”

This awareness is partly why TANGERINE has drawn such notice. Aside from being rather good, it’s currently riding a wave of interest in transgender issues. But will it last or are we witnessing a well-meaning flash in the pan? Mya is unequivocal. “It’s the start of something. This something isn’t going to fade.” Sean’s equally adamant. “It’s a movement not a fad. All I know is when I started hearing the general public talking about trans issues and the fact that in the US the most generic mainstream poppy radio stations are talking about it, you know it’s broken into the mainstream. It’s an issue that has reached this point in the zeitgeist where it’s on everybody’s minds. When we set down this road two and a half years ago it must have been brewing. I thought we were the only ones thinking about it but that’s obviously not true.”

Sean credits three major events in the US that have helped to turn the tide. “You have Obama using the word transgender in a presidential address, you have Laverne Cox [star of Orange is the New Black] on the cover of Time, and you have Caitlyn [Jenner], the biggest celebrity to go through a transition publicly.”

With all this in mind, I ask what they expected when they set out on the film in 2013. Surely the excitement generated by TANGERINE must have come as a surprise. For Sean he just saw it as a chance to make another film following the release of Starlet, his fourth feature, in 2012. “I couldn’t get funding for a bigger film and was desperate to make another movie right away. I remember Mark [Duplass, executive producer of TANGERINE and established director /actor in his own right] had offered me this micro-budget thing if I wanted. It was a real step back as usually you want to increase your budget and this was less than half my previous film. It was when we got the thumbs up from Mark and started doing our research that we took it seriously hoping it would be a recognised indie that would travel the world. Getting to Cannes, Venice or Berlin, that’s the whole goal for me anyway.”

For Mya, considering where she came from and where she now is, it’s been so much more. Barring a one-off appearance as a zombie in a small TV series in 2010 this is her acting debut. From the LA of TANGERINE she’s sitting in London just days after Magnolia’s Oscar push announcement. Tired as she is, she’s clearly having a ball. “It’s my first time in London and I love it. I want to move here and get a house. I think I’m going to buy Buckingham Palace.” A note of realism does creep in. “That place is priceless though; I don’t even think Donald Trump could afford it.” I doubt she would want to be responsible for kicking the Queen out anyway. After a constitutional detour we establish Her Majesty’s ceremonial role much to Mya’s amusement. “So the Queen just happens to be very rich and luxurious and gorgeous at an old age? I love her.”

As for what’s next, who knows. Mya is certainly very sanguine about it. “I don’t really put too much expectation on my future; I just go with the flow. That’s all I have to say.” Very much in keeping with the film really.

TANGERINE IS ON GENERAL RELEASE FROM 13 NOVEMBER NATIONWIDE