Colin Firth stars as a railway anorak and former British Army officer Eric Lomax, living in Scotland, but still deeply affected by his wartime experiences during the fall of Singapore in 1942.

The film opens with Eric’s dying moment (at 93 in 2012) and then casts back to his club in Berwick-upon-Tweed in the 80s as he reminisces with fellow Prisoner of war detainee Finlay (Stellan Skarsgard), recounting his recent meeting on a train with Patti (Nicole Kidman) who later becomes his wife. But soon after the wedding he starts to experience nightmares that transport him back to the evil camp and the Japanese officer (Tanroh Ishida) who tortured him as a young soldier during the Second World War.

The jumpy fractured narrative of this drama has the same effect as constant commercial breaks, diminishing the dramatic punch of this otherwise gripping story.  Scenes in the Far East are resplendently shot on the widescreen where Jeremy Irvine gives a stunning performance as the young and sensitive Eric, whose naivety and courage stand out as a tribute to all who fought and suffered at the hands of the cruel and barbaric Japanese warlords. 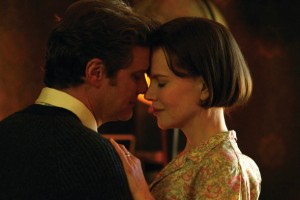 Colin Firth is outstandingly sensitive as Eric, inhabiting the part with every fibre of his body while retaining integrity as a decent Brit in the face of conflict. But his relationship with long-suffering Patti lacks any real authenticity as a modern marriage under strain, feeling more like a Victorian one, with Nicole Kidman doing her best as a mousy Anita Brookner lookalike, without the literary angle to add texture to her character, who trained as a nurse. Eventually she summons up the courage to speak to the sober but decent Finlay (Skarsgard in King of Devil’s Island mode) who spills the beans about her husband’s ordeal in the jungles of Thailand.

It then transpires that Eric’s tormentor is still alive and kicking as a tour guide. A tragic (but rather implausible) event is the trigger that forces Eric back to confront the demons of his past with a surprisingly poignant denouement that clasps victory from the jaws of failure and serves as a touching tribute for ‘entente cordiale’ between Britain and Japan.

The Railway Man is an absorbing film that almost falls victim to its narrative structure and rather leaden script but is untimately saved by exultant performances and rousing score that evokes atmosphere and suspense in all the right places. Cinematographer Garry Phillips stunning visuals reflect the strong contrast between the muted shades of the Scottish seascape and the strident earthy colours of the Far East.  So it’s really the performances that win over with Irvine and Firth acting their socks off, Kidman doing her best and Skarsgard doing his steely strong and silent Swede. Not on a par with Bridge on the River Kwai but for Colin Firth, it’s definitely one that marks him out as one of the best British actors of all time. MT