Sam Spiegel was already firing on all cylinders by the time he backed an adaptation of the standout stage play by the great Tennessee Williams, having already made The African Queen, On The Waterfront and Bridge On The River Kwai. It’s therefore no surprise that he was able to command a headliner cast anyone else might give their right arm for, Taylor, Hepburn and Clift.

All was not quite as it seemed though. In 1957, Clift had been involved in a near fatal car crash and had only been saved by Elizabeth Taylor pulling two teeth out of his mouth, preventing him from choking to death. He required extensive facial reconstruction and was also a serious addict to pain killers by the time filming started, however Taylor would only accept the role if her great friend Clift was cast opposite her.

Spiegel understood the draw of Taylor; there was nobody hotter, she having recently completed Giant opposite James Dean, her Oscar nominated Raintree County and Cat On A Hot Tin Roof with Paul Newman, so he passed over his more favoured choice of Brando to keep her onboard.

Liz first met Monty when the studio asked her to accompany him to the 1949 premier of The Heiress in an attempt to assuage growing rumours of his homosexuality, prior to their working together in A Place In The Sun. They hit it off immediately and remained close friends until his untimely death in 1966.

The subject matter for Suddenly, Last Summer was a delicate one and perhaps a difficult sell, if it wasn’t for the star wattage involved in the cast. Mental health might not be the first choice topic for a blockbuster, but the film was a huge success and Taylor was again Oscar nominated alongside Katherine Hepburn. They both lost out to Simone Signoret (for Room At The Top), but Taylor did win a Golden Globe for her performance as a traumatised young woman who cannot remember something truly horrific that she witnessed.

Hepburn plays Violet Venable, her rich, powerful but deeply manipulative aunt, threatening to have her lobotomised to keep her silent about what she witnessed the day Violet’s ‘canonised’ son died. Under extreme duress, it’s down to Monty’s Surgical Doctor Cukrowicz to cure her.

Obviously, Tennessee Williams is no slouch and the story is a good one, tension coming from the personal politics and financial need and greed as much as Catherine’s desperate illness, all topped off with sexual desire. It’s a heady mix and one we are quickly drawn into; Hepburn is sublime as the all-powerful grieving multi-millionaire.

Clift is good too but the role demands less of him and having seen several movies in the Monty canon in short order recently, the transformation to his visage is marked and appears even to have left him partially frozen. Upsetting to see his star power here prematurely on the wane.

But it’s Liz Taylor who tears up the screen. If you haven’t seen a Liz Taylor film for a while, then this is an example of why she was regarded as one of the last true screen legends, nominated for Oscars for four consecutive movie performances. There’s a vulnerability, a truth to her performance and a luminescence to her beauty that comes across in spades, even here in black and white.

Structurally, this is a storyline that may feel overfamiliar to many; even hackneyed, but it is also worth considering that this film was made in 1959 and has had many imitators in the intervening years. At the time, it was busy blazing a trail for what was permissible for the big screen as much as for a new way of performing. One to see perhaps for Kate and Liz then, rather than Monty, but one to see nevertheless. MT 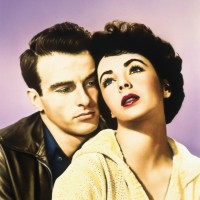