Promos director Jonathan Glazer’s two previous features have been exceptional: Sexy Beast was one of Ray Winstone’s best performances, launching his distinctive talent onto the big screen. Birth, was a drama of subtlety and resonance not least because of Nicole Kidman.

Under the Skin is a twisted, art house mind-jammer with echoes of Species and the creepiest soundtrack since Snowtown. But this is no ordinary fantasy drama. Jonathan Glazer claiming he felt threatened at the film’s premiere at Venice 2013 where the film was greeted with scepticism for its groundbreaking ideas. Based on Michael Faber’s acclaimed novel is sees an alien seductress in the shape of Scarlett Johansson who fetches up in Scotland where she turns predator on a series of unsuspecting men. Striking as a mysterious vamp with blood red lips, ‘The Female’ has a subversive agenda aimed at derailing the male of the human species. Under the Skin is a deliciously creative visual masterpiece that certainly gives us a run for our money, courtesy of cinematographer Daniel Landin. 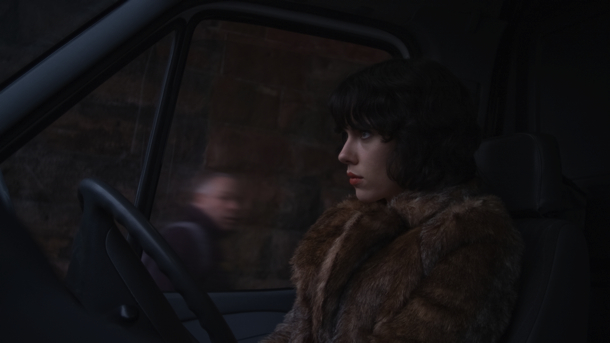 Provocatively teasing the imagination, the film opens with some luminous images of refractive light and lenses- suggesting a different interpretation of seeing things from the alien POV. Glazer then offers up a portrait of a outwardly timid but skanky looking young woman who silent cruises around the Scottish countryside and the urban backwaters of Glasgow in her black land-rover. Occasionally stopping to ask directions from random male passers-by (a cast of non-pros keeps things edgy) who are only too happy to be led astray when offered a lift.

For the first half of the film our cold-eyed provocative heroine is very much the daylight succubus: welcoming men in dark recesses of empty properties where they slowly undress at the thought of what may follow. They sink into a pitch-black viscous void as she turns to nothingness before their eyes. On a beach, she watches vacantly as a whole family drown. Without a scintilla of anguish or interest, she drives away. On meeting a deformed young stranger, she seduces him and abandons him naked on the Moors. With another, she switches to a more submissive modus operandi; or is this just a ruse to appear vulnerable in order to gain control? Having gleaned some insight into the male psyche, she learns how to control men through lust, while remaining a siren like cypher. Is she an alien with a mission to learn about feelings, or just a random psychopath to mimicking a human response? We are sucked in; mesmerised; looking for clues; hoping to make some sense of the images floating across the scenery of this sinister landscape with its haunting and unsettling soundtrack from Mica Levi.

UNDER THE SKIN morphs between horror and sci-fi; drawing you into its bewitching spell with some deliciously inventive images (some poetic, some horrific). Jonathan Glazer is a visionary artist seeing the World through different eyes; those of an unworldly being. The voyeuristic camera makes no verbal judgement as it roams the High Streets, focussing on random individuals, making us see ourselves from a new perspective, exploring human behaviour through the eyes of an alien, until everything starts to look weird. With its bewildering narrative and intense visual experience this is certainly one of the most challenging and exciting films of the past decade . MT