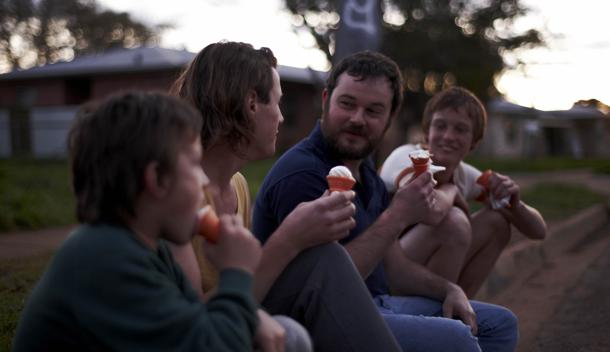 Serial killer John Bunting is currently serving 11 life sentences for crimes that took place in Snowtown near Adelaide during the late nineties.  This haunting and at times unwatchable film grips with a palpable sense of foreboding made all the more sinister by Jed Kurzel’s menacing soundtrack that heightens the tension throughout with pavlovian effect. The story plays out through the eyes of Jamie (Lucas Pittaway)  He’s a sensitive teenager living with his single mum and brothers in a poor community riddled with crime, violence and suspicion and makes ideal prey for Bunting.  James longs for a better life but is drawn to the controlling but charismatic father figure of Bunting.

Daniel Henshall, brilliantly cast here as Bunting, is a highly manipulative sociopath masquerading as a self-styled vigilante.  Mixing freely in this sad town of social misfits from paedophiles to the mentally ill,  he gains the support of Jamie by purporting to stand up for him.  Other locals are gradually coralled into this social circle and take part in the killings believing that they are justified in ridding society of its evil elements. Bunting’s real agenda is to control and steal their benefits. This sinister feature is a remarkable directorial debut for Justin Kurzel and one of the most disturbing and shocking films of 2011. MT