Carol Morley (Dreams of a Life) is a British auteur who brings so much more to her films that just the narrative. Her screen version of Martin Amis’ novel Night Train is a genre hybrid– noir in this case – and existentialism. Out of Blue is as enigmatic as its title and New Orleans is the shadowy setting where detective Mike Hoolihan (Patricia Clarkson) investigates the murder of astrophysicist Jennifer Rockwell (Gummer).

Rockwell is found dead in a planetarium where she’d given a speech the day before about Black Holes. Early clues lead to two main-suspects: Ian Strammi (Toby Jones) manager of the site, and Duncan Reynold (Majors), Rockwell’s lover and co-worker. But Hoolihan feels instinctively that the solution to the crime will lead her back into the past where Space will offer clues. A recovering alcoholic with a captivating cat (who steals many a scene) Mike nevertheless loses it completely when cornered by her own past, and performs a drunken semi-striptease on a bar table. Rockwell’s parents are also involved: Colonel Tom (Caan) – who may or may not be the suspect of a past murder spree – and her mother Miriam (Weaver), who has her own dark guilt complex, are not helping Hoolihan, neither are Rockwell’s twin brothers. When the tragedy unravels, more questions emerge, and even physical identities start to look questionable: as Jennifer says in her final lecture “our nose and our hands may not be from the same galaxy”.

The film’s main characters’ identities seem to emanate from a different past, and nothing fits any more. Out of Blue is very much Nicolas Roeg territory: his son Luc is also a producer. Morley’s narrative leads gradually leads us ‘out of this world’, where Rockwell felt much more at home than on this planet – never mind her rather dysfunctional family set-up. And Hoolihan herself is hiding behind her policeman’s (sic) mask, denying both gender and past. DoP Conrad W. Hall’s images play on tones of the colour blue: we race through the film like the night train of Martin Amis’ novel (on which it is loosely based): from the night sky to the cream receptacle found at the crime scene, and the murky metallic-grey of crimes past, everything leads to the indigo blue of cosmic Black Holes.

Morley is clearly interested in the who-done-it, but she also asks questions about human nature; and all her protagonists have something significant to hide. And she never lets them get away with it – the raison d’être of their life (or death) is always more important than the circumstances of the discoveries. To paraphrase the feature title: Blue is the new Noir. The director never gives in or compromises: the existential ‘why’ is her reason for filmmaking, the result may not be to everyone’s taste, but it satisfies an audience hungry for answers outside our immediate Universe. AS 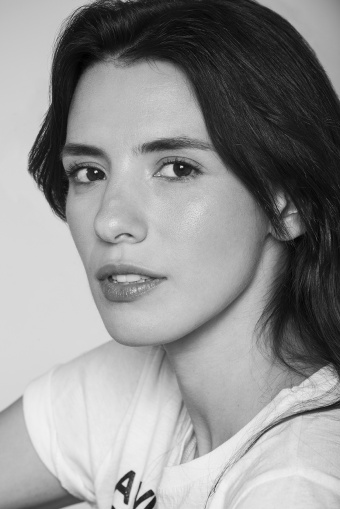 Marrakech Film Festival Jury Prize Winer THE CHAMBERMAID plays the same thematic tune as two other festival winners this Summer: Golden Lion winner Roma and In A Distant Land which won the Golden Leopard at Locarno. They highlight the isolated and lonely lives of ordinary working people, often migrants – in this case, a Mexican national whose job in the capital detaches her from her loved ones. There is a distinct chilly humour to this acutely observed feature debut from Mexican actress, filmmaker and opera director Lila Alviles. We talked to her about her drama that won the JURY PRIZE at the 17th Marrakech International Film Festival 2018. MT

The Chambermaid plays the same thematic tune as two other festival winners this Summer: Golden Lion winner Roma and In A Distant Land which won the Golden Leopard at Locarno. They highlight the isolated and lonely lives of ordinary working people, often migrants – in this case, a Mexican national whose job in the capital detaches her from her loved ones. There is a distinct chilly humour to this acutely observed feature debut from Mexican actress, filmmaker and opera director Lila Alviles. It follows the daily grind of a hotel worker in one of the Mexico City’s 5 star hotels. Cartol (La Tirisia) plays Eve with infinite grace and good humour – in one astonishing scene she stands for seemingly ages outside a lift during one of those awkward silences – catching a hotel guest’s eye several times with an expression that speaks volumes.

Pristinely executed in the zen-like interiors of this palace of interior design, the film pictures an upmarket public as they often are behind the closed door of their luxury suites: ill-mannered, demanding and crude. Bereft of their clothes they also take leave of their humanity – never mind their courtesy. This is social politics laid bare. The Chambermaid also examines the crafty interactions between the low-level workers themselves: the cunning soft sales techniques of her colleague in the laundry who is trying to supplement her low-paid job by selling hand cream and Tupperware. Or just trying to con her into sharing the latest fad – in this case, a gadget that delivers a shock to stimulate a feel-good rush of endorphin. Like a some ghastly face to face equivalent of FarmVille.

The Chambermaid is set in Mexico City’s Presidente Intercontinental. Eve is hard-working and diligent, but if she tries harder she’ll be allocated the stratospheric, newly refurbished 42nd floor with views to die for and even infinity pools. Pinning her hopes on the promotion, she improves her efficiency but to no avail. The only bonus here is in the lost property cupboard. In one of her rooms Eve has found a red dress and hopes to take it home, if the owner doesn’t claim it. But her gruelling schedule leaves no time to be with her child, let alone meet a partner. Outwardly timid, Eve shows her true colours in one scene involving a window cleaner who has taken a shine to her – along with his windows. Eve acknowledges him at a distance. Her reaction is plausible – a little light relief in a sea of sameness. But Alviles restrains herself and keeps this convincing.

Stunningly captured by Carlos Rossini’s creative camerawork, this sealed and sanitised world has a strange beauty. Loosely based on the book Hotel, by Sophie Calle, The Chambermaid is a contemplative but well-paced cinema verité piece that resonates with a powerful message from both sides of the equation. Eve’s humdrum existence is piqued by moments of insight that show her in a different light as she endure the indignities of her role with calm forbearance and subdued silence. The magnificent skyscapes are hers to see but never to enjoy in her closeted existence, locked in an eternal bubble with no respite, until the final scene where the ambient sounds of exotic birdsong replace the refrigerated buzz of musak and air-conditioning.  MT

1: Some of the most interesting films are coming out of South America – your story is simple but has universal appeal

Alviles: When I’m asked to explain my film I realise its so simple and yet profound. The idea started 8 years ago when I saw book about a photographer who took photos of the things people had left behind in hotels. I’m originally from a theatre background so originally it was going to be a play, but then I decided to make a film – to show to the chambermaids working there what I had in mind – and in the end it turned into a feature film as I followed them through their daily lives for 6 years so I could understand their world.

2: The hotel feels like a microcosm of Mexico or even Mexico City with its different social make-up – the rich the poor, men and women behaving badly – behaving well.

Alviles: Yes, you’re absolutely right – I had so many stories to tell and yet I had no formal training, or diplomas in film – so in some ways I was an outsider. But I was determined to make the film and that’s how it all happened, and then we premiered in Toronto. Now, I’m taking on the festival circuit.

3. How did you finance the feature?

Alviles: The money came from my own savings but I was so passionate about my idea and so I went with it through intuition. Then my producer joined me and helped me finish the film and other producers joined us to promote it. And we filmed in 17 days and have no done 18 festivals.

4: The good thing about your film is that its minimal dialogue and meditative pacing make it an absorbing watch for all nationalities – viewers can sit back and just enjoy the visual story. And that’s its strength, apart from the intriguing narrative. Are you part of the filmmaking community in Mexico today – along with Alfonso Cuaron or Michel Franco?

Alviles: Yes but not for me! There’s a lot of great cinema in Mexico, I go twice a week to the cinema. Well it’s difficult because I’m the one who came out of nowhere with my film as I didn’t attend film school. But now my film has been shown in Morelia – Mexico’s leading film festival  – and gradually it’s gaining an international platform. For the first time in my life my work speaks for what I am – whether I’m a woman or not.

5: The central actress Gabriela Cartol is very strong – how did you cast her?

Alviles: We had instant chemistry but I knew she was right for the part instantly. I often chose newcomers for my roles. But with Gabriela we have a trust that makes everything happen.

6: Yes she holds that scene outside the life with humour and with dignity – it’s my favourite scene is it yours?

Alviles: Yes it is – it’s almost like a documentary. I wanted so much to be a filmmaker and now I realise that this is my thing!

7: Do you have a project in the pipeline?

Alviles: Well I originally come from theatre and opera – and I love music. My next story actually comes from a personal experience and I started writing it before The Chambermaid. It’s a documentary.

Eva Trobisch’s All Good, is about the dark night of the soul in the aftermath to unimaginable tragedy. Something happens, we think we can deal with it, and it goes away – at least for a while – only to return with a vengeance, as grief, anger and finally depression overwhelm and repress the human spirit.

After an ordinary night out at a school reunion Janne (Aenne Schwarz) is raped by a seemingly innocuous old school friend. Martin (Hans Löw) is now a professional, corporate type who duly accompanies her back home after the party. Both are a little tipsy but the evening did not hint at romance or even mild flirtatiousness. So it’s odd that Martin, almost as an afterthought – decided to makes a move.  After a sustained attempt at seducing her, Janne finally acquiesces to Martin’s advances – the scene is well played and captures all the nuanced undertones of an unwanted encounter. In the full light of day, Janne reflects with distaste and then mild anger at Martin’s presumptuousness. But feels awkward about discussing it with her boyfriend Piet (Andreas Döhler) who’s absorbed in his own dramas.

In her feature debut, which won Best Newcomer at Locarno 2018, Trobisch uses these subtle shifts in human response to create a thoughtful and absorbing drama that kicks over the ashes of suppressed anguish with worthwhile insight and impressive command. All Good is just that, Janne fronts up well to her trauma but what lies beneath is quite a different scenario. And Janne’s  increasing and unacknowledged exasperation turns slowly to simmering rage.

At work, Janne’s new boss (Tilo Nest) is also preoccupied with his own issues, and so she goes about her work with resignation and determination not to let the episode overwhelm her as a young, intelligent and independent woman in the 21st century. But life but goes on and Janne will not give up. A surprisingly mature debut with some strong performances, especially from Aenne Schwartz in the lead. MT