THE GIRAFFE follows the rather lost and lonely character of Ahmed who roams around a ghostly Cairo, mostly at night. It’s an aesthetically appealing mood piece with some creative camera angles and a strong sense of place but the potent visual allure is not enough to carry its vague dramatic arc and shady characterisations. In the Egyptian city of disenchanted drifters, we are led to believe that Ahmed is trying to save a stranger in urgent need of an abortion but doesn’t tells us why, although it does highlight an Egyptian healthcare in crisis. The story drifts from one scene to the next and offers no real dramatic heft to retain our attention, despite its short running time. A plotline involving a giraffe that has disappeared from Giza Zoo also feels unconvincing and Ahmed appears to be lost in his own surreal madness without any plausible backstory. The female characters seem equally lost in their own issues: two appear to be seeking abortions but again this strand is enigmatic and largely unresolved and sadly does nothing to bolster the encouraging message of female empowerment that it coming out of the festival, supporting the film community across the Arab world. Magdy has a powerful artistic vision and THE GIRAFFE would work very well as a short but as a feature length drama it needs a stronger script to carry its potential message forward. MT

YOMEDDINE (Judgement Day) is a coming of age road drama where two outcasts discover the harshness of the real world outside the lepper colony where they have spent most of their tragic lives. Funded by kickstarter, A B Shawky based his film on real people he met at the Abu Zaabal Leper Colony while filming his awarded documentary The Colony: childless leper Beshay and his schizophrenic wife; Hamed, the legless former truck driver, and Nubian boy Obama. After the death of his wife, we re-join Beshay and his apprentice Obama (Ahmed Abdelhafiz) on a journey south in a donkey cart, to trace the rest of Beshay’s family and find out why his father abandoned him there as a child.

A gentle sardonic humour saves YOMEDDINE from descending into sentimentality, even though the two’s sad plight may often have you close to tears. Newcomer Gamal plays Beshay (who is no longer contagious) with vulnerability and amusing self-deprecation, and the down to earth Obama tags along on the mission.

Poverty and religion are the themes that run through this slim but poignant story. Having been judged all their lives for their looks, when will they be judged for their personalities? Obama is more confident than Beshay but the two share an appealing rapport. During their trip they encounter all sorts of nefarious characters along the way, and although there’s no strong narrative, this watchable film ambles gently on as we enjoy the rapport of the characters and the simple storyline enriched by the passing Egyptian landscapes – that veers off the beaten track, offering sites that are unfamiliar to most. YOMEDDINE is a restrained piece of work that may not travel far, but there is a powerful charm to its journey. MT 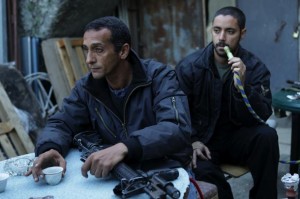 Portraying the painful personal stories behind the events leading up to The Arab Spring, Ibrahim El-Batout’s quietly elegant and surprisingly intimate fourth feature has considerable charm and visual allure.

Taking the lives of three men from different sectors of Egyptian society he paints an authentic portrait of modern Cairo in a time of political and social turmoil on the eve of the January 25th Revolution. Amr watches youtube footage of torture inflicted on citizens by the state police and is reminded of the suffering he endured in similar circumstances recently.  The focus switches to Adel, who was responsible for some of this torture in his role as chief of the Secret Police.  But it’s when TV show host Farah enters the picture that we discover that the purported ‘truth’ that he is forced by his bosses to dole in his public broadcasts is quite different from the reality. 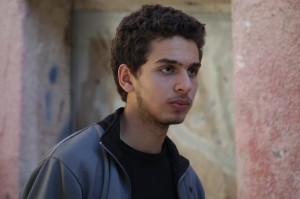 Almost poetic in feel, El-Batout’s unique brand of storytelling is sombre and engaging, creating a palpable sense of time and place. With some exquisite art house visuals and well-crafted performances; although at times Farah is unconvincing in his bid to convey the real moral inquietude key to his character. And although this feature comes a little late to the ‘party’ to be of current political relevance, it nevertheless captures the zeitgeist and stands as a powerful and significant insight into the Arab Spring. MT

Upbeat, fun and vibrant; Microphone is a picture postcard from the Mediterranean town of Alexandria and Ahmad Abdalla’s follow up to Heliopolis.

Khaled (lead and co-producer Khaled Abol Naga) arrives back in his native town from the States to find things aren’t what they used to be.  Even his former girlfriend is moving on to study abroad. He comes across a band of young musicians and a documentary crew who want to film him.  Although glad to be back home, his life is “touched with a little bit of sadness that never goes away” thanks to his unsettled love life.

Punchy, full of passion and often rather hit and miss, this film taps into the Alexandrian way of life and sheer exhuberance of Egyptian culture.  Khaled’s character remains undefined. He’s a metaphor for Alexandria’s sultry dynamism, a guy reacting to events around him, and Abdalla’s visualized fascination with the city’s urban energy is a magnetic force and a delightful insight into Egypt before the Arab Spring. MT ©