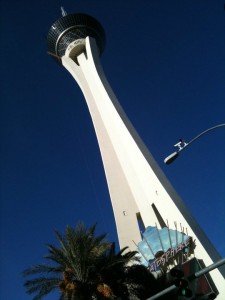 Gambling isn’t the only reason to visit Nevada’s stunning resort. Also a haven for moviegoers, LAST VEGAS may tempt you to visit the exciting city for the magnificent array of cinemas screening the latest in American cinema: from mainstream to cult classic and art house fare. Urbane cinefiles see the city differently than most: as a cornucopia of historical venues where films were shot over the years.  Fans of cult casino and gangster films, flock to Vegas to visit the iconic places where films have been shot almost en masse in the city of lights and casinos. LAST VEGAS was filmed here but let’s take a look at some other top spots for film fans. 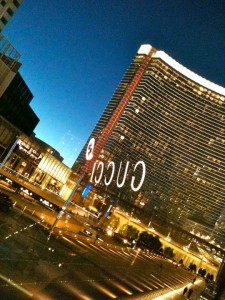 For film fans who want to catch a glimpse of one of the most recognizable filming locations in Las Vegas, Circus Circus is an essential stop. The entrance appeared in the James Bond movie, Diamonds are Forever, and an exterior shot appears in Austin Powers: International Man of Mystery. To the dismay of many Hunter S. Thompson fans, the iconic merry-go-round bar at Circus Circus that garnered a spot in Fear and Loathing in Las Vegas has closed. To be accurate though, this was not the bar that actually appeared in the film, as Circus Circus did not give permission to film there. 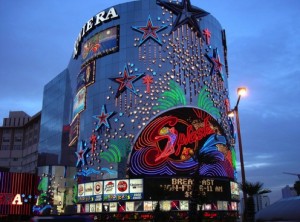 Since Las Vegas is a popular and exciting location to shoot films, some hotels have turned up in multiple films over the years. Also a location appearing in Austin Powers and Diamonds are Forever, Riviera Hotel and Casino has been seen in Martin Scorsese’s Casino, the 1960 Ocean’s Eleven and the campy 90′s dancer-drama classic Showgirls. The outside of the Riviera Hotel and Casino is a highly recognisable spot for sightseeing film geeks. 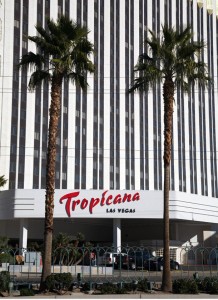 The millions of fans who loved cult classic, The Godfather trilogy should recognise the Tropicana in Las Vegas as Michael Corleone’s Las Vegas casino business and the location where many of the Las Vegas scenes in the movie were filmed. The Godfather utilised both the inside and the outside of the hotel extensively, but it was only referenced and not shown in the final versions of the second and third films of the franchise.

With an ongoing theme of appearing briefly in the background of a multitude of films including, Mars Attacks!, the Neon Museum Boneyard is essentially where the vibrant neon signs of Las Vegas are put out to rest. The museum also appears in the upcoming film LAST VEGAS.  Although the Neon Boneyard is not open to the public, dedicated film buffs can make reservations for the guided tour for only $15.

The Bellagio Resort and Casino 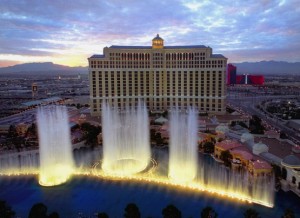 The Bellagio, as all movie buffs should know, stars alongside Brad Pitt and George Clooney in the 2001 remake of Ocean’s Eleven. The movie’s casino scenes were shot right on the Bellagio’s casino floor! Although the vault shown in the movie wasn’t the real one, most other scenes purporting the casino are real. If you would like to dine at the table where George and Julie shared a meal in one of the most famous scenes of the movie, it was shot in the Bellagio Picasso restaurant—book table 24 if you want to re-live that experience. The luxury hotel also made an appearance in the 2007 sequel, Ocean’s Thirteen.  The Bellagio has also been the location for romantic comedies such as Lucky You and What Happens in Vegas and made a fleeting appearance in The Hangover. 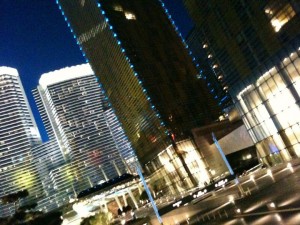 Being the second largest hotel in the world by number of rooms and the largest hotel resort complex in the United States, the MGM Grand Last Vegas is featured in a multitude of movies. Film officionados will recognise the casino resort in movies such as Ocean’s Eleven, Vegas Vacation, and The Great White Hype. In addition, the MGM Grand’s Wizard of Oz theme is referenced in the film Swingers. With its Hollywood history, the MGM attracts film buffs worldwide.

The Aria Resort and Casino

Since the opening of the new modern style hotel in 2009, The Aria has been a popular location for films. The resort’s luxury suite is featured in Louis Leterrier’s 2013 film Now You See Me and LAST VEGAS (2013), where it appears as the venue for the bachelor party hosted by Morgan Freeman’s character, Archie. MT

WE FLEW TO LAS VEGAS COURTESY OF VIRGIN AIRLINES