A new exhibition reunites the Norwegian Expressionist painter Edvard Munch with his creative contemporaries, putting his work into context with European influences from Art Nouveau, Expressionism and Symbolism. 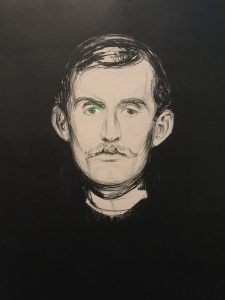 Edvard Munch (1863-1944) was a famous pioneer of modern art, best known for his iconic image of The Scream. His idiosyncratic expression of raw human emotion reflects many of the anxieties and hotly debated issues of his times, yet his art still still resonates today.

Edvard Munch: love and angst focusses on Munch’s remarkable and experimental prints – an art form which made his name and at which he excelled throughout his life. The 83 artworks on show together demonstrate the artist’s skill and creativity in expressing the feelings and experiences of the human condition – from love and desire, to jealousy, loneliness, anxiety and grief.

The exhibition also shows how Munch’s artistic vision was shaped by the radical ideas expressed in art, literature, science and theatre in Europe during his lifetime. His most innovative period of printmaking, between the 1890s and the end of the First World War, coincided with a great period of societal change in Europe which Munch experienced through constant travel across the continent on the vast rail network. The exhibition will pay particular attention to three European cities that had major influence on him and his printmaking – Kristiania (Oslo), Paris and Berlin. A small selection of Munch’s personal postcards and maps are used to give a flavour of Munch’s journeys.

Munch suffered all his life from a deep-felt sense of anguish, possibly due to the death of his mother when he was only five, and his sister when he was still a young teenager. These traumas clearly shaped his emotional world and affected his relationships with women: His prints demonstrate his passion, but also his fear, of women. Separation and isolation from those he held dear led to a state of anxiousness, but he was also aware that these feelings where the key to his creative expression. Later he went on to say: “For as long as I can remember I have suffered from a deep feeling of anxiety which I have tried to express in my art”. 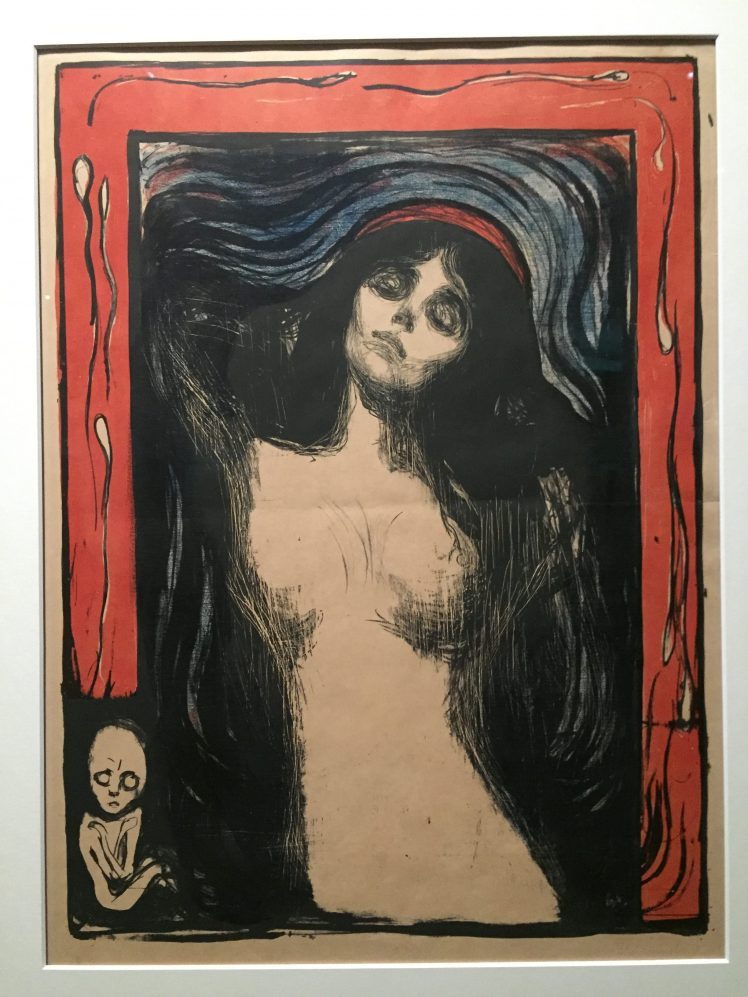 Psychology was all the rage in the late 1890s with advent of Freud’s ‘discoveries’ and literature and culture carried much of the responsibility for popularising the ideas and practices of this rather decadent period in Europe. This trend only magnified Munch’s trauma and he made free expression of his obsession with and fear of female power and the sense of suffocation and entrapment it brought to him. He had many affairs but fled from marriage and commitment. Munch admitted in later life that his visual ideas were directly inspired by the pattern of love, infidelity and despair experienced by his friends in Kristiania (Oslo) whose loose-living, chaotic lifestyles exposed the dark side of the Bohemian dream. His images of passion and jealousy recall the emotions surrounding their affairs, and reflect memories of his own turbulent first relationship with a married woman, Milly Thaulow.

The Scream (1893) print – suggests that the image depicts a person hearing a scream, rather than a person screaming – was undoubtedly his most famous work probably inspired by a rare, wavy cloud formation seen only in Northern Europe. In a twist of fate, Munch sister Laura was diagnosed with schizophrenia in 1894, and institutionalised in a hospital near the site of The Scream on the road to Ekeberg.  The English translation reads “I felt a great Scream pass through nature”.But a similar pose of a screaming head, with hands cupped around it, appeared in an early work recalling the death of his mother, as he stands by her bedside, looking out in sheer desperation and misery. 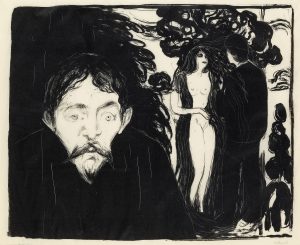 During his life Munch spent much time in Paris and Berlin where in 1892, he was invited to exhibit his paintings in the recently formed German Empire. Berlin was Europe’s industrial boom city, ruled over the ambitious Kaiser Bill (Wilhelm II). Grand avenues gave the impression of military order but bohemian undercurrents ran just below the surface, alongside Europe’s strongest workers’ movement. His exhibition horrified the traditional art world, but was much admired by the Avantgarde with the scandal helping him to launch his international career.

Clearly Munch’s work and his friendships with the Swedish playwright and painter August Strindberg, Toulouse Lautrec, Paul Gauguin, Max Klinger, Vincent Van Gogh and German philosopher and writer Friedrich Nietzsche could provide rich potential for cinema yet sadly only a few filmmakers have been inspired. The first was a British director Peter Watkins whose rather stolid made for Norwegian TV  drama Edvard Munch (210 mins, 1974)) captures the mournfulness of the artist, chronologically charting his traumatic early life fraught with illness and death, leading on to his ostracisation in traditional art circles and his cafe society days with nihilist Hans Jaeger in Oslo and Strindberg in Berlin.

The second is Munch 150 (90 mins, 2013) Ben Harding’s factual documentary that travels to Oslo where it goes behind the scenes to show some the mounting a major exhibition of over 150 works devoted to the national hero. It then tours Norway to provide an in-depth biography of a man whose work captures the zeitgeist of the mid-19th century right through until the German occupation of his homeland in the Second World War.

Edvard Munch’s prints is the largest in the UK for 45 years. | British Museum