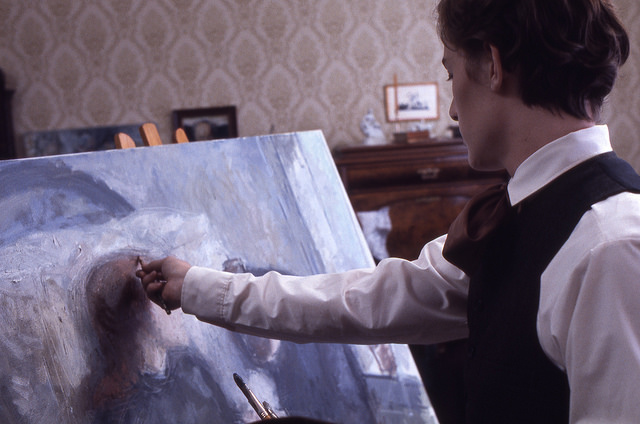 In the ultimate biopic of Norway’s most famous artist, Peter Watkins sketches a profoundly atmospheric cinéma vérité portrait of 19th century Kristiania (now Oslo) where the expressionist painter (Geir Westby) grew up in a protestant middle class family with two brothers and three sisters in 1863.

His mother was to die when he was five, inauspiciously shaping his introspective life in a society where sickness and death were prevalent amongst the young. Munch himself nearly died of a haemorrhage aged 13  and legalised prostitution and child labour were the norm offering the artist plenty of scope to draw on for his iconic paintings. “Illness, insanity and death were the black angels that watched over my cradle and accompanied me every day of my life”. It seemed inevitable that this milieu of grief and nihilism would culminated in his ultimate expression of anxiety ‘The Scream’ thirty years later.

A fly on the wall camera introduces the Munch family, Watkins’ slow and deliberately didactic narration presents their lives in a factually informative way, making use of the painter’s own diaries and key historical events of the era. Peter Watkins is well known for his dispassionate treatment of often inflammatory subjects and his biopic is a leisurely two-hour affair that immerses us in the era and the artist’s own world which ran contrary to the establishment, his work being described as ‘ugly and deranged’ in a critical assault that continued for most of his career. Munch was simply expressing his feelings in a visual way using a “nervous, dissolving treatment of colour”.

The scenes of his love affair with Mrs Heiberg (a graceful Gro Fraas), a married woman without children, are sensually rendered in the romantic fashions of the era and provide a welcome counterpoint to those featuring Munch’s sombre childhood marked by grief and illness: “Sex is the only human pleasure that spares man from ultimate loneliness”: Munch describes his relationship with Mrs Heiberg as making him feel much calmer although the affair was not to last.

From then on Munch’s brushstrokes are shown scratching and scraping at the canvas as his work becomes more impressionistic, and Watkins cuts back to scenes of him weeping pitifully. Watkins’ treatment gets increasingly more manic and dreamlike as the film progresses echoing Munch’s troubled state of mind with an evocative use of flashback and cuts. At a time where all of the major artists are still involved in exterior depictions: Cézanne, Van Gogh and Renoir, Munch was painting groundbreaking symbolist works that transcended all external reality to express innermost feelings and emotion.

His critics stood by and laughed at the canvasses. Hurt and confused by their negativity Munch withdrew from the world during the 1888s while his fellow artists died of syphilis, consumption, suicide and tuberculosis. But Munch gains strength again in the early 1890s as his work takes on more detail and clarity of vision. Still obsessed with Mrs Heiberg, he marries in hast but then leaves for Paris. His diaries maintain that his inner pain is clearly the origin of his creativity: “Without anxiety and illness I should have been like a ship without a rudder”. With Edvard Munch Peter Watkins presents an epic work of historical and artist genius that is still unparalleled. MT

NOW ON MUBI | ON BLURAY COURTESY OF EUREKA MASTERS OF CINEMA |