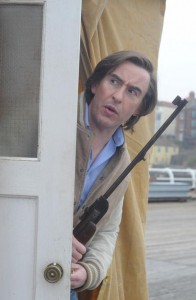 There are plenty of laughs to be had in this close-up and personal film debut of the saddo presenter at North Norfolk Radio. Awash with ‘too much information’ (he loses his trousers, quite literally!), it records every crack and crevice of Alan’s cringeworthy physique and shamelessly pursues a politically incorrect agenda of witty one-liners skilfully crafted by co-writers Peter Baynham and Armando Iannucci (“Forget about Jesus, as far as I’m concerned, Neil Diamond is the real King of the Jews!.) and helmed by the safe hands of ‘Father Ted’ creator Declan Lowney.

After the unfortunate turn of events on his BBC show ‘Knowing Me, Knowing You’ where a guest accidentally gets shot, Alan’s fighting for his career for the second time around when a multimedia conglomerate “Shape” takes over the station threatening a round of redundancies and putting his slot ‘Mid-Morning Matters’ into jeopardy.  The first head to roll is that of fellow presenter and ‘has-been’ Pat Farrell. But Pat’s having none of it and returns with a gun, fully-loaded and firing on all cylinders to plunge the station into full siege mode, forcing Michael into a cupboard (‘Like a Geordie version of Ann Frank’) and Alan into the limelight acting as a mediator between Pat and the Police. 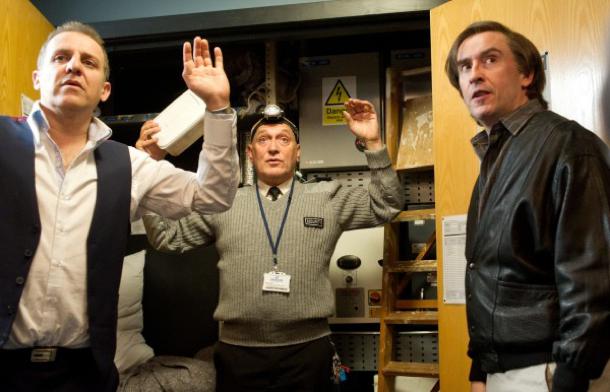 Naturally Alan relishes this chance to take centre stage in a media circus of heightened melodrama, but the emphasis here shifts onto fast-paced action and slapstick sequences descending into banality at times, and away from the element we’ve all been waiting for: the next chapter of Alan’s life as a delusional porn-obsessed loser whose children no longer speak to him, whose PA’s preoccupation with him is unwanted and unwholesome and whose ‘mildly cretinous’ Ukrainian girlfriend ‘Sonja’ has him firmly by the short and curlies.

That said, this big screen debut offers great entertainment value, preserving the integrity of the ‘Alan Partridge brand’ where so many others such as League of Gentlemen, Borat and Brüno are a shadow of their TV and radio versions. Alan may have lost his trousers but Alpha Papa definitely has us wanting more. MT