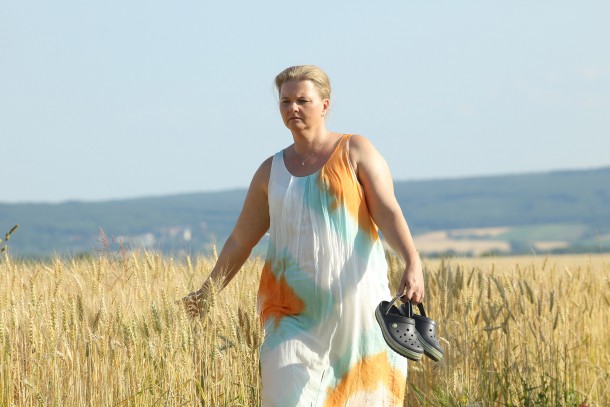 Best known for his performance in The Grand Budapest Hotel, Austrian actor turned writer-director Karl Markovics attempts poetic realism in his quirky second feature, a follow up to the award-winning drama Breathing.

Ulrike Beimpold (The Wall) plays a buxom blond suburban housewife who develops an unusual relationship with God. Wittily scripted and visually slick and inventive, Superwelt loses its momentum after an amusing and watchable start.

Gabi (Ulrike Beimpold) is happy in her work as a supermarket cashier and runs a tight household for her pot-bellied husband Hannes (Rainer Woss) and screen-based son Ronnie (Nikolai Gemel) in the leafy provincial town of Bruck, surrounded by golden cornfields and wind farms. But life is too good to be true and one day, out of nowhere, she is visited by an invisible and magical force, not similar to that in The Wall, that rocks her ordinary world, sending her completely off balance emotionally and scampering into the fields, like the demented victim of some kind of religious fanaticism.

Beimpold is exultant as Gabi, her facial expression is off vacant gives a finely judged performance, her face vacant and anxious, but never overplaying Gabi’s beatific bafflement. A cartoonish chorus of minor characters, from intrusive neighbors to fainting Jehovah’s Witnesses, provide plenty of agreeable levity.

But Markovics proves more adept at setting up his divine dramatic puzzle than he does at resolving it. His script runs short on lucidity and momentum in its second half as Gabi wanders the sunlit Austrian landscape, increasingly angry with a Supreme Being she never summoned in the first place. Her spiritual epiphany ends up as a kind of extreme form of relationship therapy, exposing the hidden faultlines in her marriage. “How often have you been happy?” she asks Hannes bitterly. “How did we settle for so little?”

Markovics remains frustratingly opaque about the theological aspects of his story, and some may find the finale a fuzzy-headed anticlimax. All the same, Superworld is consistently sweet and engaging, a warm-hearted celebration of minor earthly miracles as much as the more heavenly kind. MT