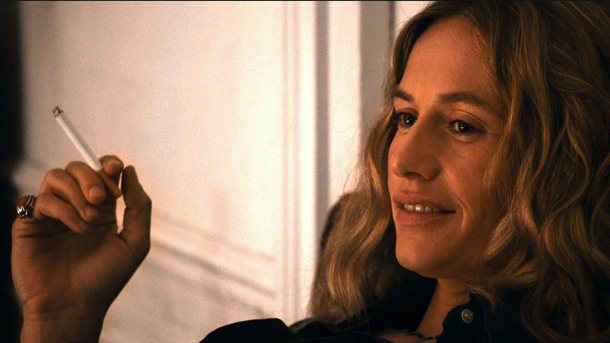 Catherine Corsini brings a sizzling energy to her lesbian love story set in Paris and the glorious landscapes of Le Limousin. Summertime will appeal to arthouse lovers and the LGBT crowd alike with its fresh and feisty turns from Cécile de France and Izia Higelin as unlikely bedfellows who come together during the French feminist uprisings in 1971.

Izia Higelin plays Delphine, a simple country girl arriving in Paris from her parents’ farm to seek her fortune in the capital. Feeling gauche and naive she soon gets caught up in the vortex of female political activism attracted by the strong and earthy women who appeal to her nascent lesbian leanings. Working at that well known grocery store Félix Potin, she falls in love with 35-year-old Carole (Cécile de France) who is dating the dishy writer Manuel (Benjamin Bellecour). After an awkward first act focusing on the feminist fervour of the time – which sadly feels embarrassing and rather contrived – the two begin a torrid affair that takes them back to the countryside where Delphine’s father becomes seriously ill and her mother Monique (Noemie Lvovsky) is left to run the business. They all get on like a house on fire in this sunny second act that serves as a genuinely delightful introduction to  daily life on a small working farm. Here we meet Antoine, a family friend and Delphine’s intended – according to her mother – and he immediately takes on the role of a sexual voyeur, tuning into couple’s romantic vibes, while giving Carole a wide berth. Delphine’s heart is in the ‘terroir’ but her love for Carole grows. Cécile de France gives a gutsy go at being Carole, torn between her life in Paris with Manuel and her budding feelings for Delphine.

Corsini conveys the strong physical urges of her lovers with scenes of earthy nudity and splashy sex. And although the two are a potent match, it’s clear Carole is experimenting while Delphine is  committed. Higelin brings a natural vulnerability to her part, not dissimilar from that of Adèle Exarchopoulos in Blue is the Warmest Colour. The younger of the two, she exudes a natural affection for Carole as well as a healthy lust, but Carole is a more complex girl whose ego demands to be worshipped.

Corsini is no stranger to big-screen lesbian love affairs, best known in this context for her 2001 Cannes competition hopeful Replay, featuring a gutsy yet tragic relationship between Emmanuelle Beart, a successful actress, and her less accomplished partner. Here the focus is more on innocence versus experience.  In a welcome twist, Delphine pursues Carole initially in a cat and mouse chase that spices up the storyline. But tradition starts to take over as the family responsibilities take over, throwing her back into Antoine’s orbit.

Although the film struggles for a feminist political agenda this often feels forced and less convincing than the scenes in the traditional farmstead. Lvovsky is a natural as Delphine’s mother whose straightforwardness and feral protection of her daughter and farm provides lush contrast to the more liberated Parisian style of Carole. Azais’ character masks an emotionally buttoned-up man, hesitant to pursue his personal agenda, a quality her shares with his object of affection Delphine.

Jeanne Lapoirie’s widescreen cinematography is resplendent but doesn’t idolise the Rubenesque voluptuousness of the naked women making love in the meadows, and Gregoire Hetzel’s occasional score adds a zeitgeisty ’70s twang to the soundtrack. MT