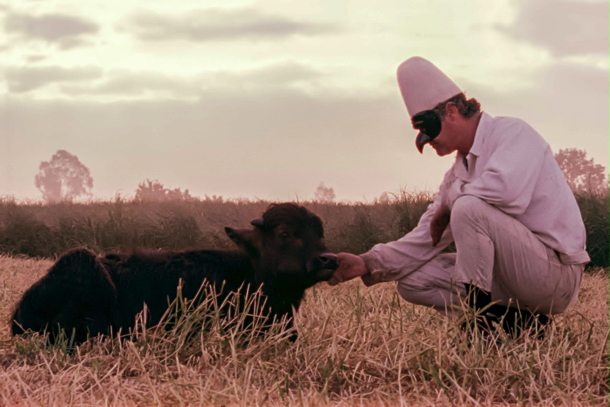 Pietro Marcello was born in Caserta in Campania in 1976. He began by studying painting at the Naples Academy of Fine Arts. Self-taught, he cut his teeth on “participative videos” shot in the prisons where he was teaching. From 1998 to 2003, he programmed the Cinedamm film events, at the Damm centre in the Montesanto district, of which he was one of the founding members. It was in this context that he directed his first short films Cartaand Scampia (2003). In 2004, he completed Il cantiere, a documentary that won the Libero Bizzarri Prize. The following year, he directed La Baracca. His first feature-length film, Crossing the Line (Il passaggio della linea, 2007), won many accolades. But it was in 2009 with The Mouth of the Wolf (La bocca del lupo), which won awards at Turin and at the Berlinale (Forum section), that he gained international recognition. In 2011, he paid tribute to Artavazd Peleshian in The Silence of Pelesjan (Il silenzio di Pelesjan), while Lost and Beautiful (Bella e perduta, 2015), in selection at Locarno and the Grand prix du Jury at La Roche-sur-Yon, brought him a wider audience. In 2019, Martin Eden, adapted from the eponymous Jack London novel, was presented at the Venice Film Festival and met with great critical acclaim. Moreover, the film embodies the move of Marcello’s work to fiction, while keeping a very strong link with the documentary genre. His new opus For Lucio (Per Lucio) premiered at the 2021 Berlinale.

MARTIN EDEN IS NOW IN CINEMAS